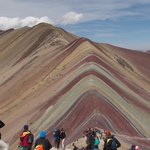 On my journey through Atacama and Peru I have seen a bunch of colored mountains. But they somehow pale when compared with Vinicunca -- the "rainbow mountain" --- which is only a day tour from Cusco. And not only Vinicunca is beautiful by itself, as a bonus you get views of glaciers around Ausangate. With so many beautiful views there is only one problem, that is, damn tourists. After they extended the road just a few years ago everybody including his/hers grandma can do this (ok, maybe not. It is still 500m of ascent from 4500 to 5000 but you get the point).

Note: When reading this post you may get a feeling that I did not enjoy the hike. This isn't true, the views were terrific. It is just that I found it hard to adjust from my solitary self-organized style of travel to mass-based tourism.

Being up late last night I wake up only on my second alarm. Quickly trying to start my mental processes and finish packing for the trip I end up being late about 15 minutes for the pickup time. And then I wait in the reception. And wait. After half an hour I become quite concerned -- did I really miss the trip? Wouldn't they wait for me? With my concerns I let the hotel reception to call the agency. After a few exchanges it looks like the car is "a bit late". It actually tooks another thirty minutes for me to being picked up. Damn, I could have overslept more!

Finally in the minivan I instantly set into dozing mode. Which is fine because this is a long ride. Unfortunately, it is not easy to sleep with Peruvian drivers. And when we switch the pavement for an unpaved road it becomes totally impossible. The next half an hour to hour we rattle on the road until the car finally stops.

With the pickup time very early it makes sense to have a breakfast as a part of the trip. So when we stop it is actually time for this morning ceremony. Being repeated every morning I would expect this to be pretty well organized but the people seems to be rather surprised by the amount of tourists today. (Frankly, the poor restaurant people can really be surprised as the travel agencies seem to be one big mess). While the traditional food (which consists mostly of rice) is great they apparently does not account for ever-hungry cyclists. Fortunately, there is also a bread and marmelade. I seem to eat as much of it as the rest of the table.

With the refueling done, we board the car again and rattle a bit more along some standard Peruvian-style roads. Some of the people seem to be surprised by the deep valley and lack of guard rail. Personally I don't find it anything exceptional. I mean, compared to Bolivia where you could not see the bottom of the cliff without actually falling this road seems to be pretty normal.

When we finally stop at a big parking lot the hike can start. It is "measly" 6-7 kilometers with about 500 meters of ascent. Not that much though with altitudes between 4500 and 5000m it isn't that trivial. Of course, our minivan wasn't the only one arriving here. In fact, we were in a some kind of a van train. So it is no surprise that there are more people than ants here.

To not get lost, we are given a name of the group - Inti (Sun in quechua). And we set off, each with his/hers own pace to the top. The journey is punctuated by locals with horses asking if I don't want to take a horse ride. Don't ask for the price though or you will instantly know that the local economy must be devastated by this suddenly high-earning task. 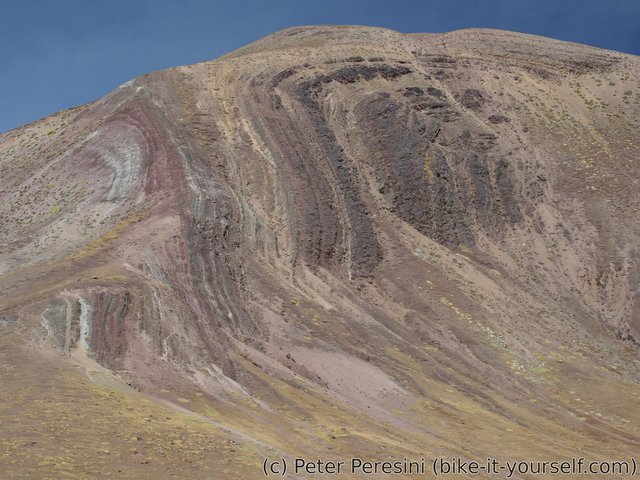 The demo of what will come 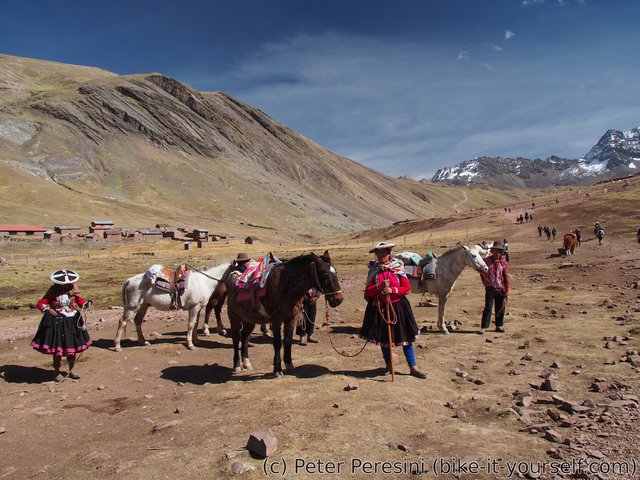 On the brighter side (literally), right from the start we have a good view of some peak near Ausangate. With its steep sides I am sure Swiss would like to import it if it was possible. 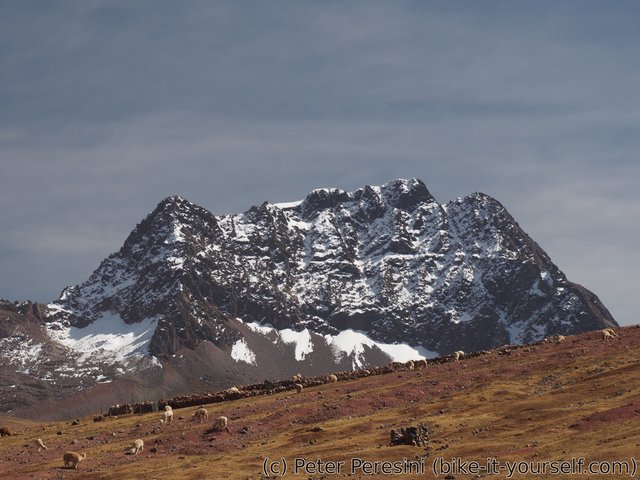 One of the peaks around Ausangate 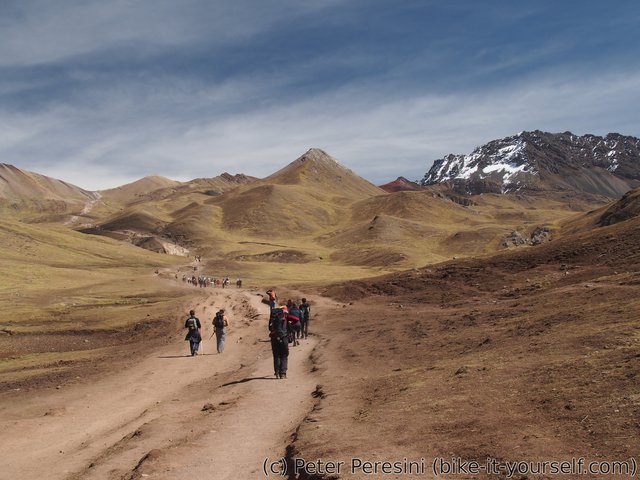 The destination of the trail is pretty obvious

When I finally get to the top I am quite amazed. First of all, the famous view of Vinicunca just makes you wonder if you are suddenly seeing Saturn rings. The mountains around it are quite colorfull as well. And Ausangate with its massive glacier is just breathtaking. 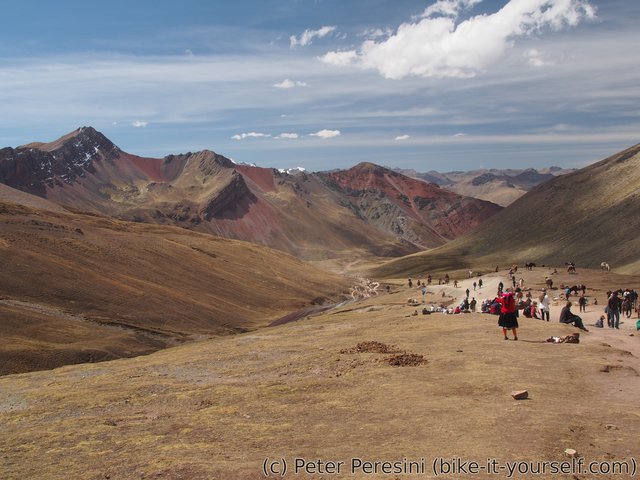 Looking back I can see some interesting color play as well 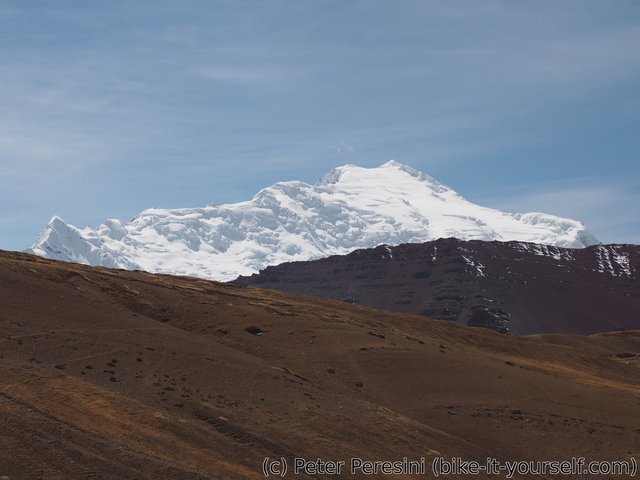 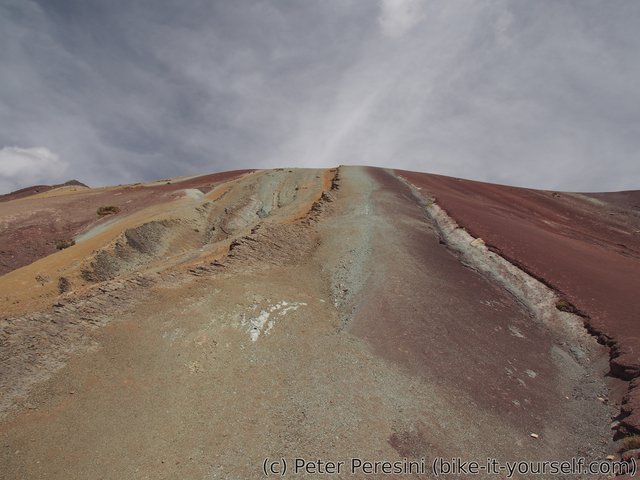 The famous color bands of Vinicunca from a non-traditional angle 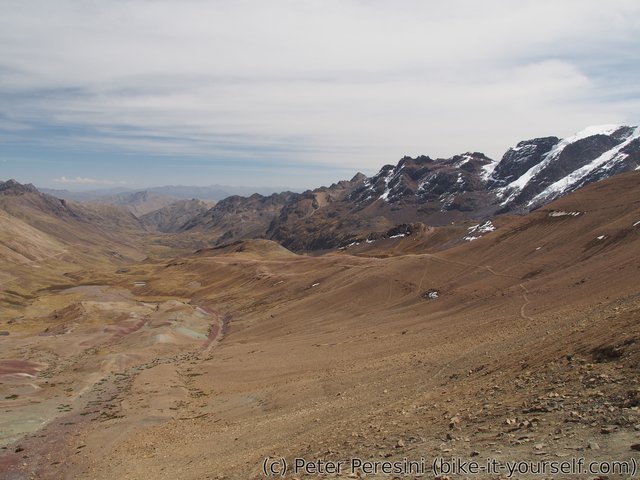 Other side of the pass 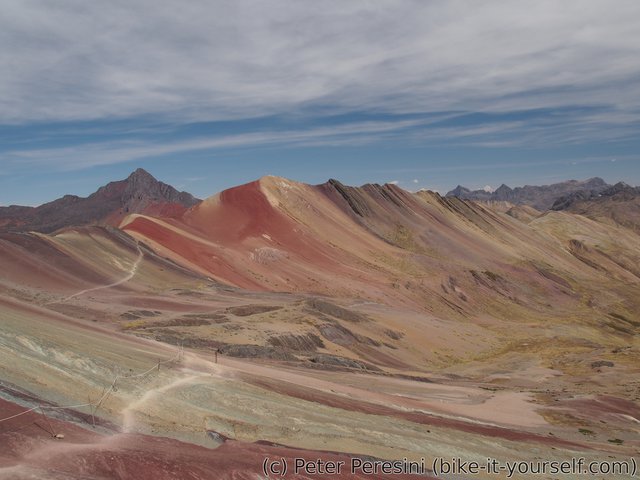 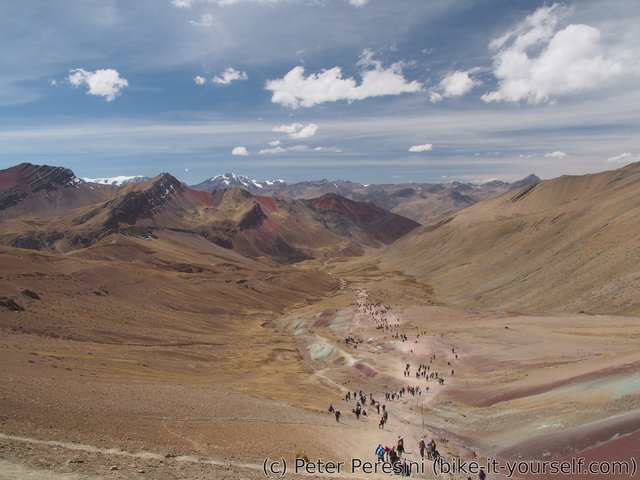 There are about as many tourists as ants 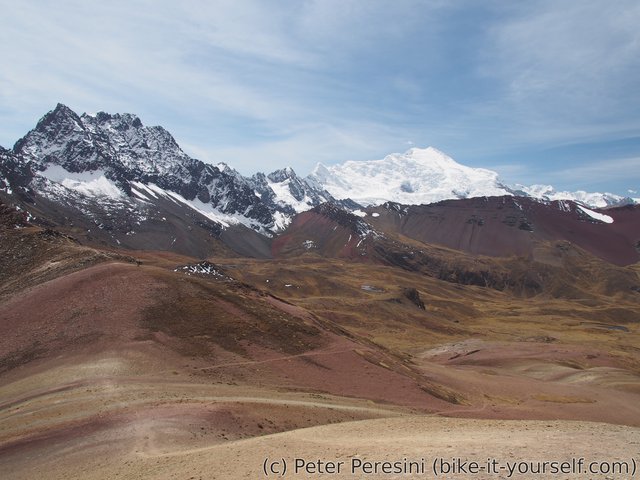 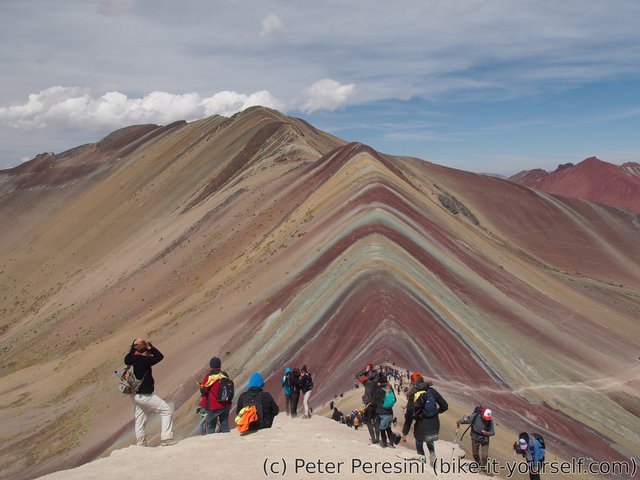 And here it is. The famous rainbow mountain. 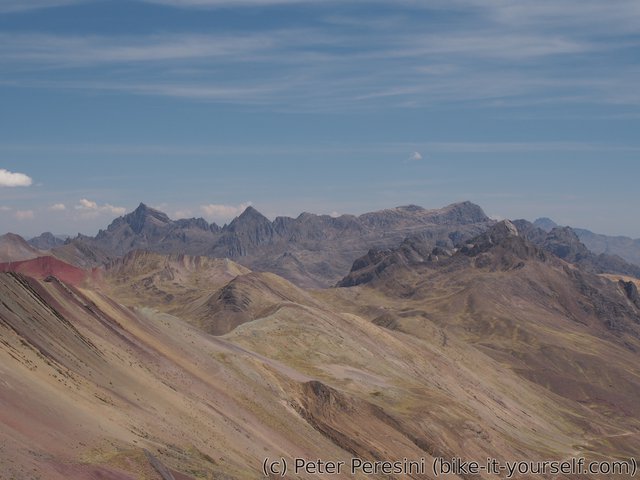 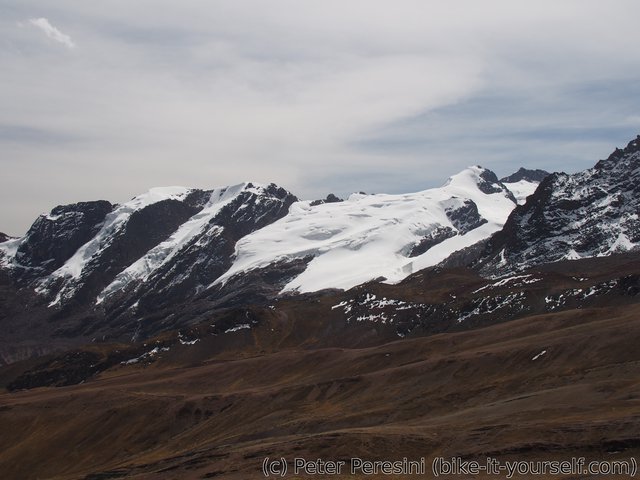 This area must be a heaven for moutaineering

Because I got to the top with a decently quick tempo I figure out I still have some nontrivial time before we will return. Instead of just lazing around (as most of the people seem to do) I decide to make a little detour and see what is behind the next pass. I have about 30 minutes so I take a rather quick tempo with semi-running downhill to make it a sure deal. When I get to the pass another incredible view opens. This time the major there is definitely red. And with only a few people around. If I knew that there is a multi-day hike possibility, I would definitely take it. (Though, to be fair, it seems to be an underground knowledge and there probably aren't many agencies which offer it). To my astonishment if I wanted to walk further I would need to pay another fee (I already paid an entrace fee to the Vinicunca section a short way from the parking lot). In either case, my time is running up so I just follow the path back. 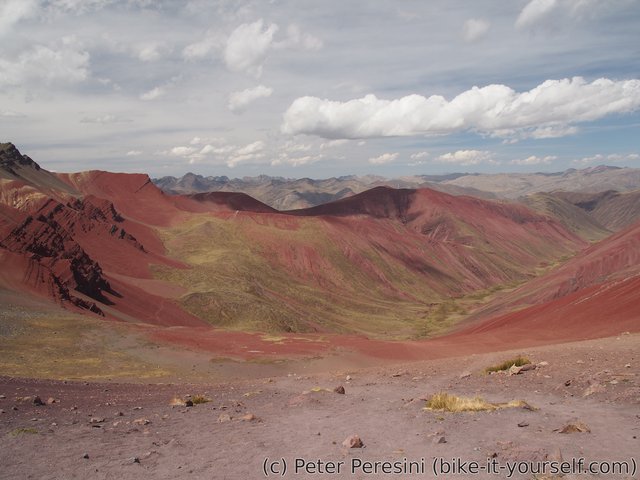 A little side-trip reveals beautiful red valley. Unfortunately I need to return by now (and they want me to pay a bunch of Soles to hike there anyway) 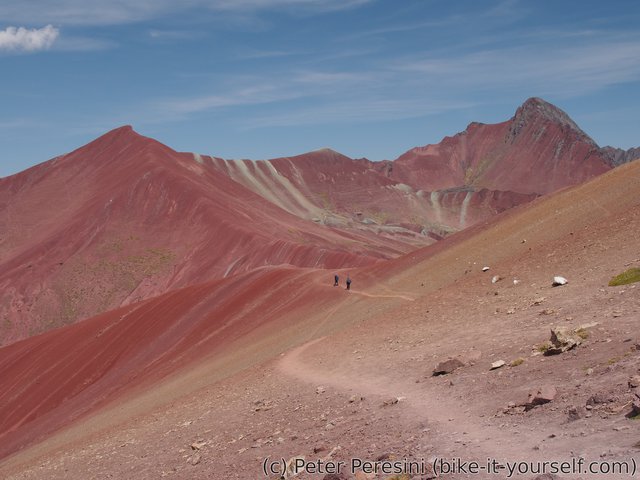 Someday I should do the whole trek 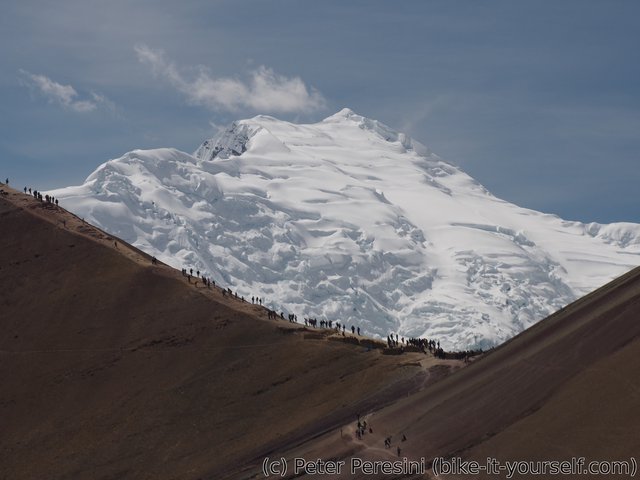 Looking back at ants below Ausangate

Xenical 60 Mg <a href=https://iverstromectol.com/>stromectol dose for scabies</a> Propecia Worked For Me Thinning Hair