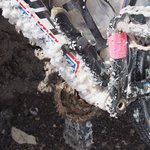 ﻿Because riding one salar isn't enough, I am continuing with another salty adventure. This time it is Salar Coipasa. And apparently it is a different beast from the smooth Salar de Uyuni.

The plan for today is about 40 kilometers until Tres Cruces. If I wanted to also pass through the salar, it would be a bit too much. Especially given the fact that the road is supposedly sandy and very bumpy. In order to cater for my dietry needs, I check out the main plaza of Llica for any breakfast. The selection isn't great but quinoa juice and some fried potato things are enough to satisfy my hunger. 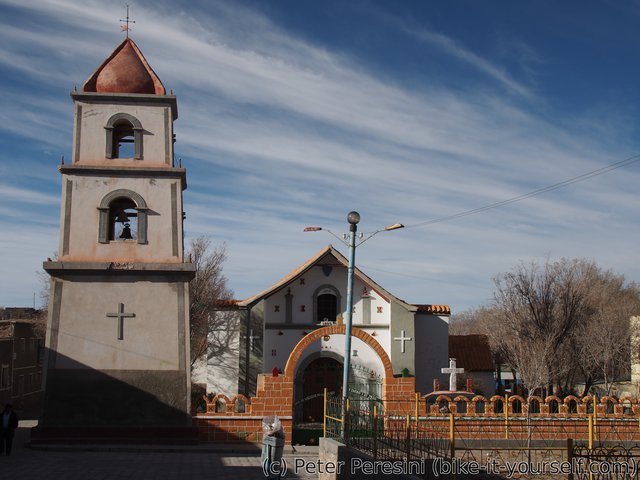 From the start the day is much more enjoyable than yesterday's apocalyptic views. This cannot be said of the road though -- it definitely gets sandy quite quickly. The road passes through a nice landscape though. And even through a super-tiny village of Challacollo with a nice church. 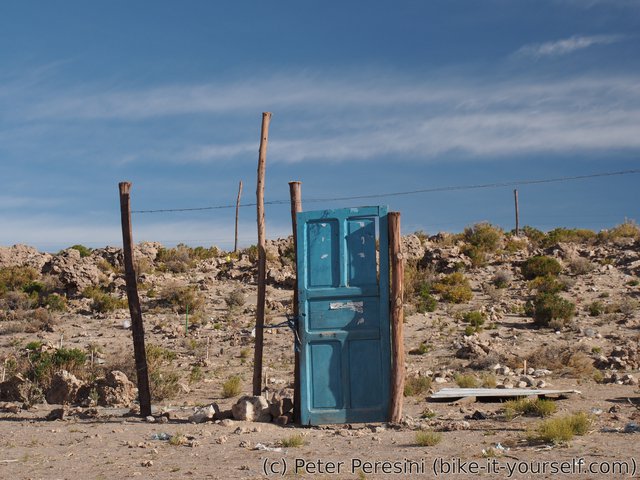 This definitely must be a magical door. Why else it would be standing there? Will it transfer me to Narnia or some other magical land? 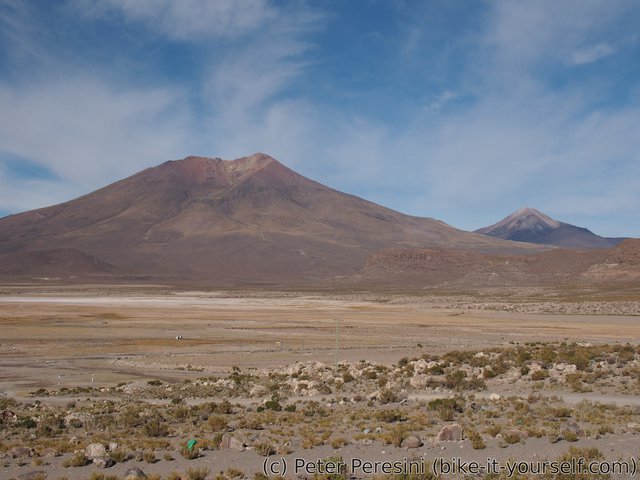 Views with mountains in them 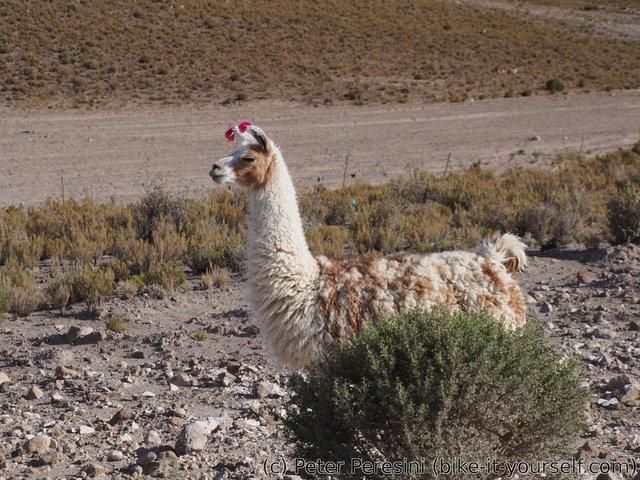 Aplacas are a standard addon of the country 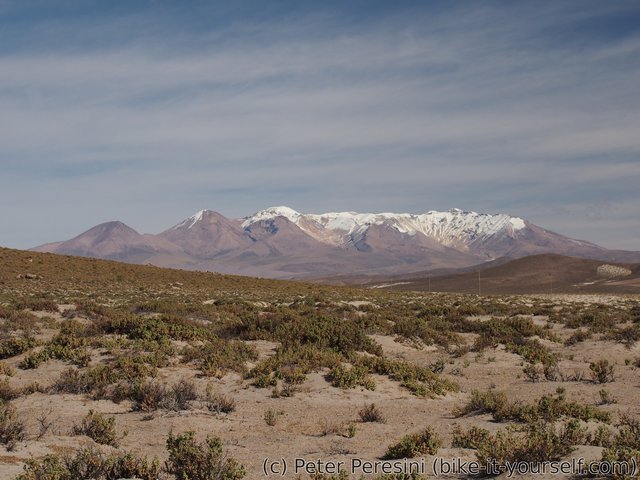 More mountains. These are probably around the border with Chile 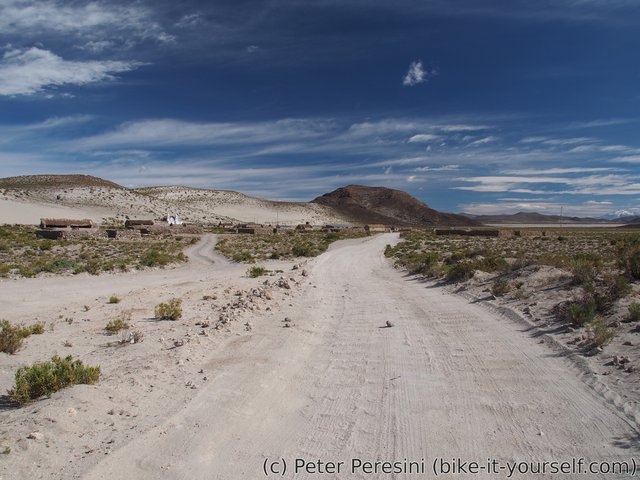 The road gets sandy 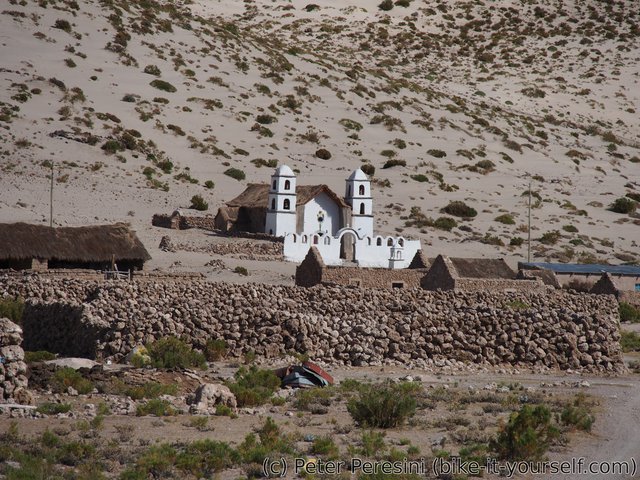 Church in a tiny village of Challacollo 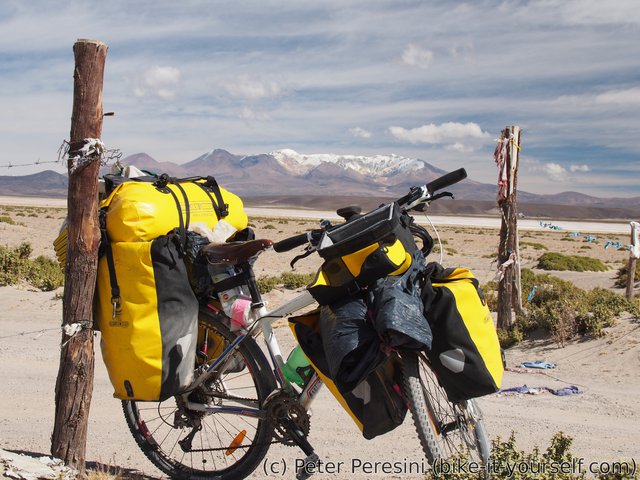 If it ended only with a sandy road, it would be great. Unfortunately, I don't really listen to Pikes' advice that the salar might be spongy and the best way is to really detour to Tres Cruces and use some kind of a ramp there. Instead, as soon as I touch edge of the salar, I decide to try my luck and go directly for it (saving about 20 kilometers of a detour).

This works for a kilometer or so. And then the hell starts. The salar here is like a Spongebob -- it is a bit of salt on top of soft sand. Basically, impossible to ride and hard to push. Fortunately, there are some mini islands which tend to be more rocky and thus more on the rideable side. But it is a hard battle. Continuing on, there is a bit more salt and when I finally pass the last island, after about 5 kilometers of pushing, the salar is mostly rideable. I say mostly because while it goes well most of the time, there are times when my bike just fells through the salt into some super-sticky and smelly goo. Yuck! 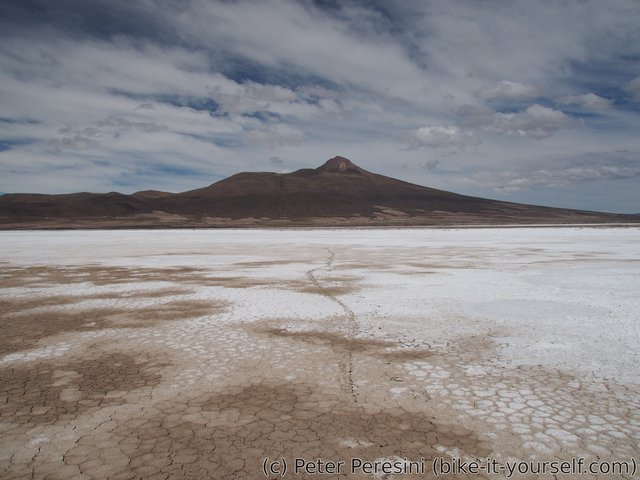 Then the salar becomes more grey as I reach some shallow part. Fortunately, this part is still good to ride. Finally, the salar becomes a salar and I can see shiny crystals everywhere. Of course, my spongebob pushing activity means I am quite delayed. And I definitely cannot make it to the land by the evening. So I end up camping on a salt. Quite fun except for the annoying wind. But at least my tent is completely freestanding so I don't need to stake any pegs into the impossibly hard salt. 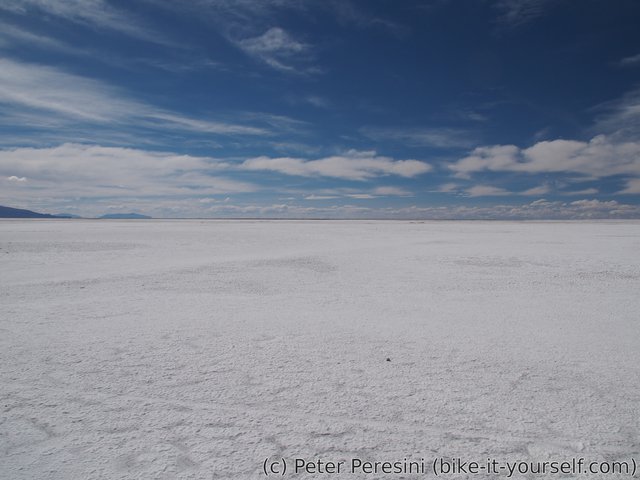 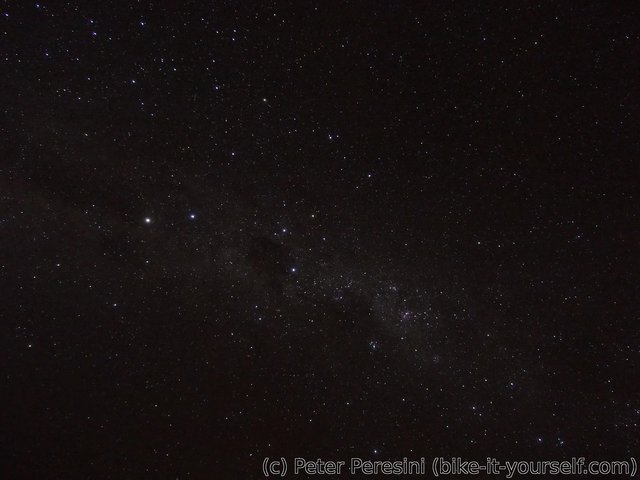 The night sky is amazing. That is if you don't freeze while watching it

Because yesterday I managed to actualy make it much further than the original plan (which was to camp on the edge of the salar), I am increasing my ambitions and instead of Coipasa I now want to reach Sabaya. 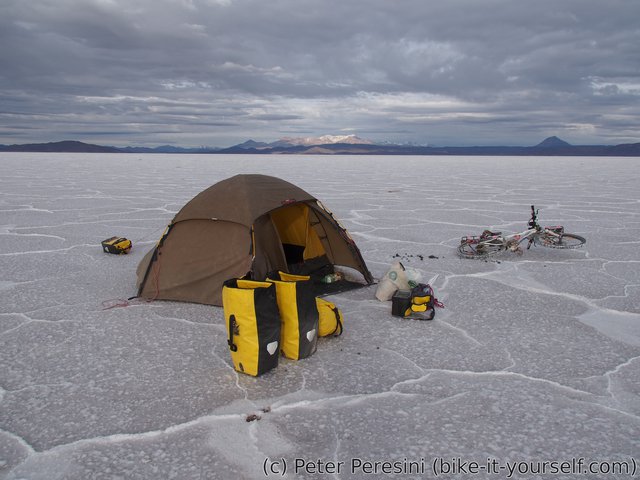 The first problem I face in the morning is that I have no clue where I have stored my sunglasses (later it turns out I left them inside a tent when I packed it). Of course, this isn't a good thing given the fact that I will be riding the damn sparkly white salar for the whole day. At least the weather is cooperating a bit and there are some clouds hanging over the sky. 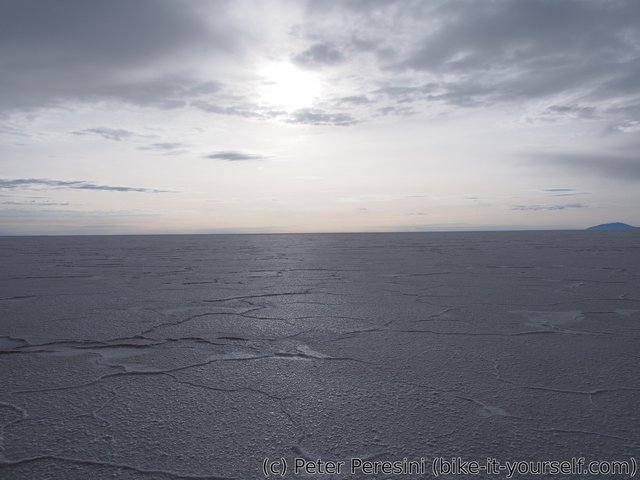 The sky is a bit cloudy today 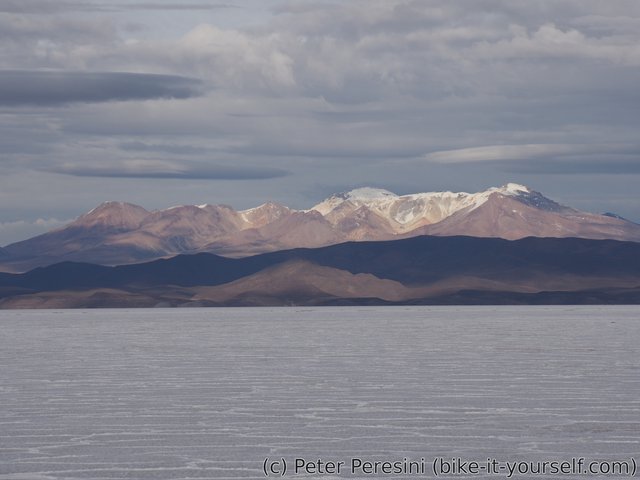 Unlike Salar de Uyuni, Copiasa doesn't have so many jeep tracks. That is to say, I am just freestyling my way through the white plane with a help of a GPS. Which brings out some surprises. First, there are some parts of the salar which are underwater. Fortunately, you can usually spot them from a decent distance and try to ride around it. Until you find a real stream flowing through the salt. This needs to be crossed. Fortunately, the streams aren't big so it is possible just ride across them given a good crossing point. 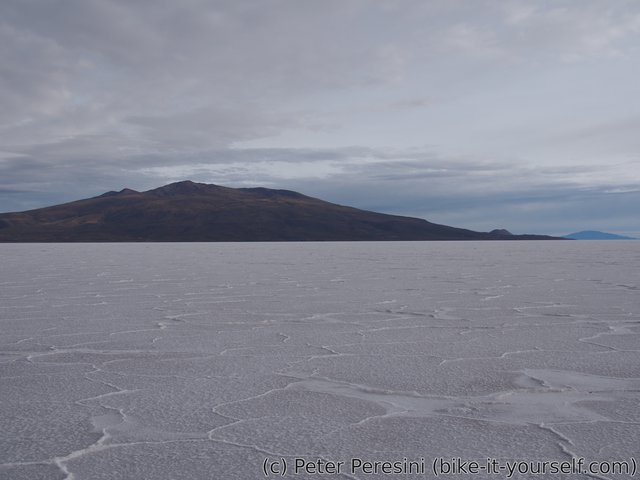 Island of Copiasa. My navigation friend for a while 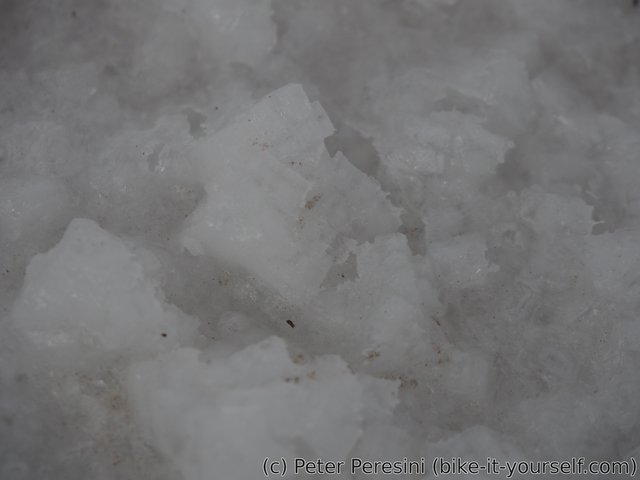 Salt crystals are quite big here 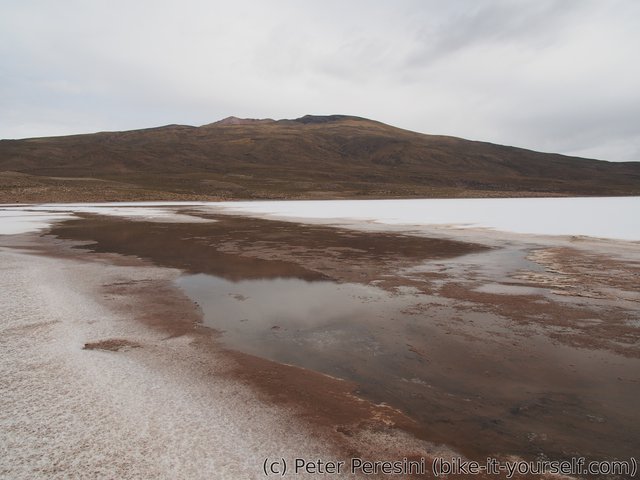 A stream I need to cross. Fortunately it is not deep 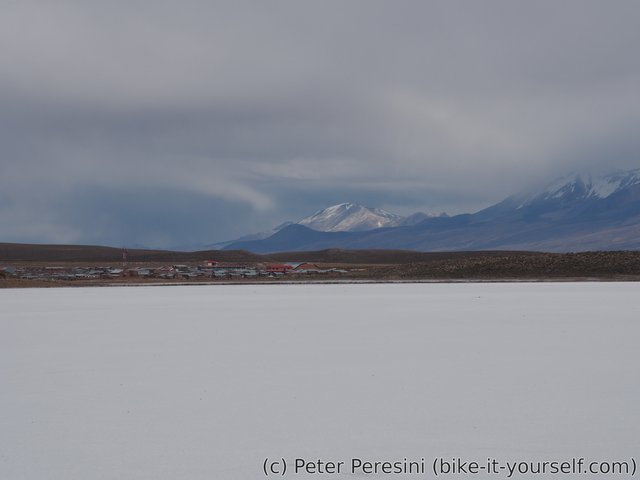 As I near the north part of the salar, it gets more and more wet. This isn't exactly big pools of water. Instead, it's just small ponds or just wet areas. Fortunately, it is quite easy to ride through this. The only problem is that the wet salt now sticks to everything.

After I reach the other end of the salar, I am finding a small shrine and it is time for a good lunch. I now have the last 25 kilometers to Sabaya though I wish it would be a bit less. I can already see some dark clouds over a Chilean side (I am pretty close to the border). The east side is still good so far. Though as I pedal to Sabaya, the dark weather seems to follow me quite fast so I push with all my strength to get there. 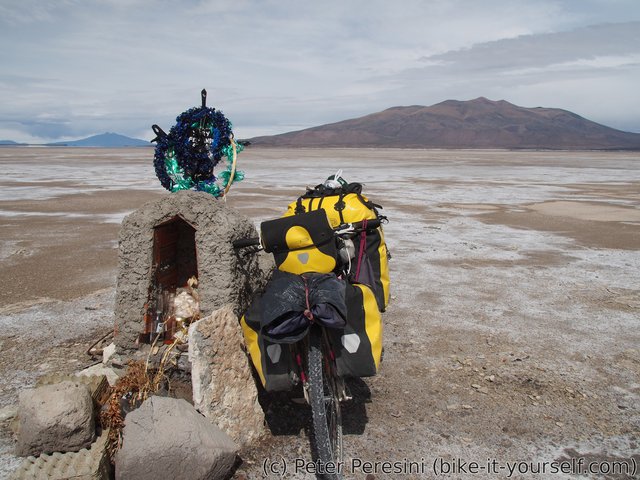 My lunch place is this little shrine 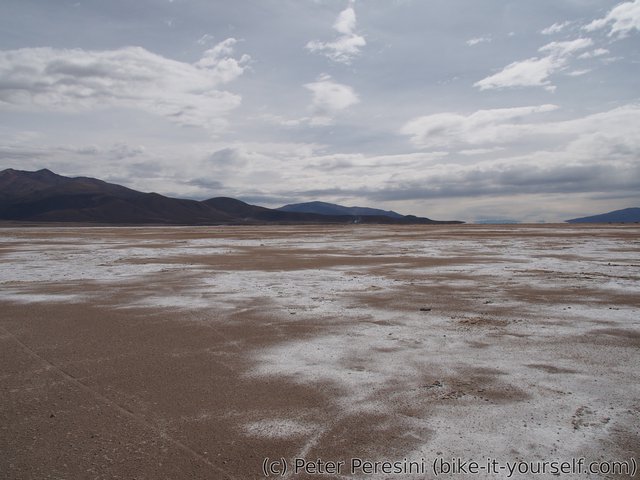 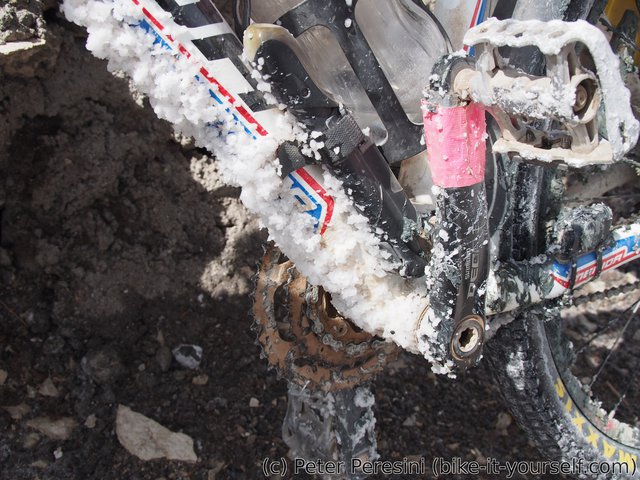 I collected quite some salt in the salar 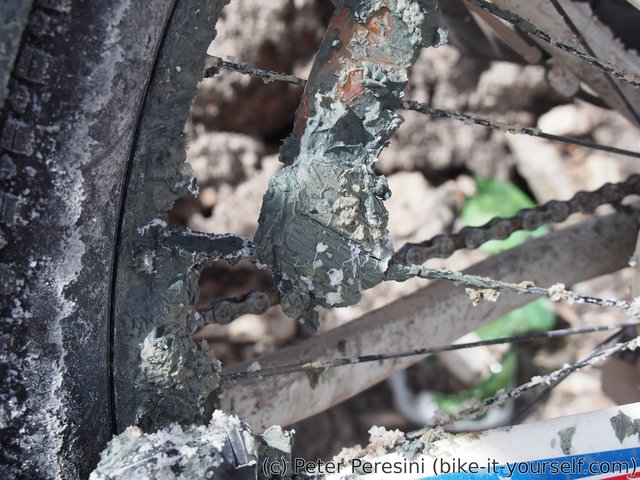 And some goo as well 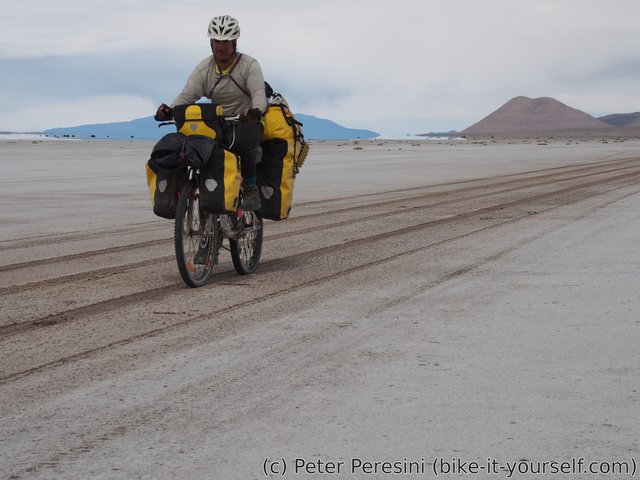 Track towards Sabaya on the edge of the salar 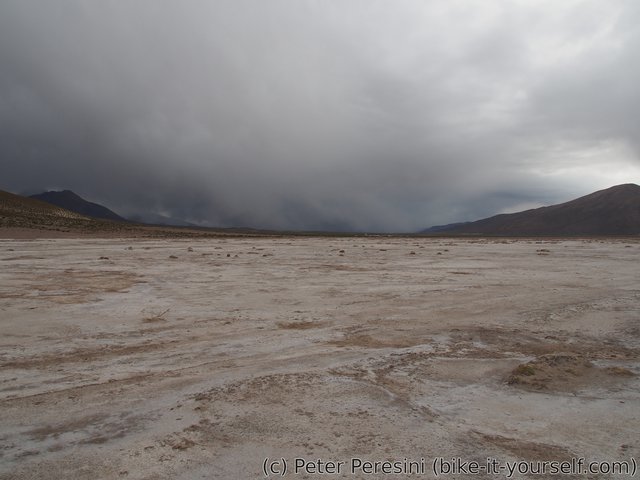 In Sabaya I am finding a ho(s)tel. Unfortunately, there doesn't seem to be anybody around. Until some german expedition tourists arrive. The guide is kind enough to call me somebody responsible. In the meantime, I am cleaning my bike from all the salt and goo that has accumulated during the salar ride. Definitely quite a lot of stuff. And especially salt isn't exactly good for bike so cleaning it is a must. Meanwhile the hotel manager arrives and I finally have a bed.

For the dinner I explore the possiblities. And I have a fried chicken. By now I understand that Bolivians just probably don't eat anything else. Basically, a chicken is a number one (and sometimes the only one) choice on a dining list. I am pondering that if ever chickens decide to strike back, Bolivia would be the first country to fall.

I would like to know if it is possible to dissolve the hard salt by pouring water over it for staking a camping peg down there. I will do the crossing when the worst of winter month is over

I believe that is one of the such a lot significant information for me. And i am happy reading your article. However should statement on some common issues, The site taste is great, the articles is actually excellent : D. Excellent activity, cheers

These are really enormous ideas in concerning blogging. You have touched some fastidious points here. Any way keep up wrinting.