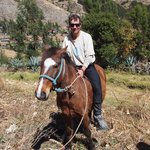 After the "mandatory" altiroute done I now head east towards Cusco. Originally I though this would be only an "utilitarian" route with not much exciting to see but I turned out to be wrong. On the dark side of the things I also turn out to be too trusting and I (almost) get robbed.

My plan from Haquira is to make a detour to Cusco. Apart from having some of my things shipped there I of course want to see what is this grigo central of Peru about. But for story about that you will need to wait a bit more. Right now my immediate plan is to go to a village of Mara and then maybe start a descent down to a valley. From Haquira there are two roads to Mara and I obviously choose the one which is marked as less important on my map.

The road selection appears to be great. As soon as after a quick few kilometers get off the main road all the (small) traffic completely disappers. Instead, I am left alone on a narrow winding road that goes along the mountain. But mountains are not the major thing to observe today. No, in fact it is deep valleys which capture my eyes. Already from yesterday the scenery is slowly changing with deeper valleys, more vegeration and (as I get lower) higher temperatures. 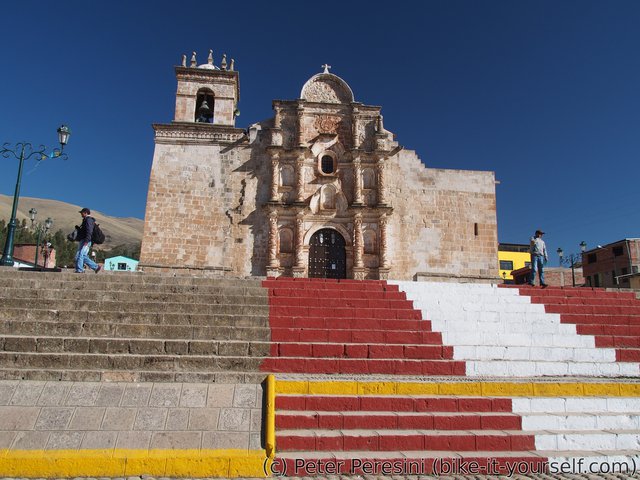 I say goodbye to Haquira 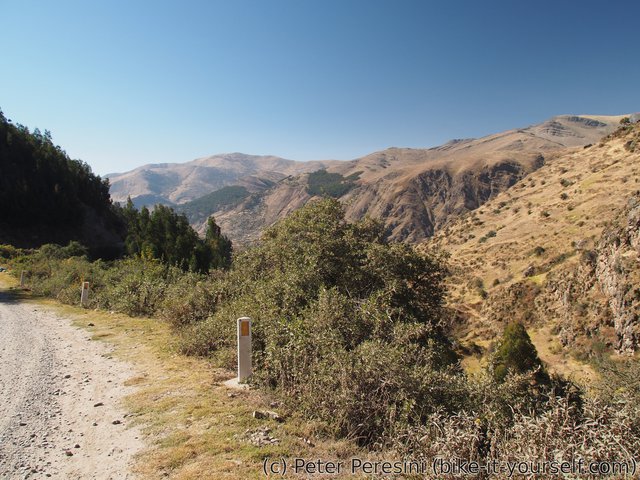 And I roll onto a backroad to Mara 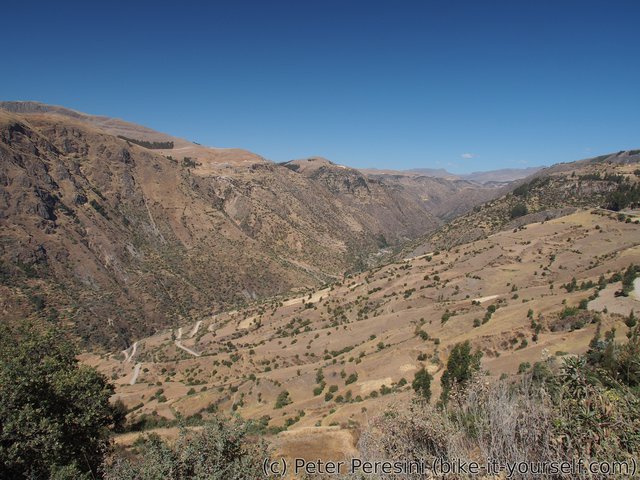 The road goes along a deep valley/canyon

While the road tries to go on contourlines around the mountain it does not manage to do this too well as it constantly goes up or down to avoid some cliffs. With the blazing Sun I am feeling too hot for the first time in over a week. But this does not matter as I continue to enjoy the great scenery. 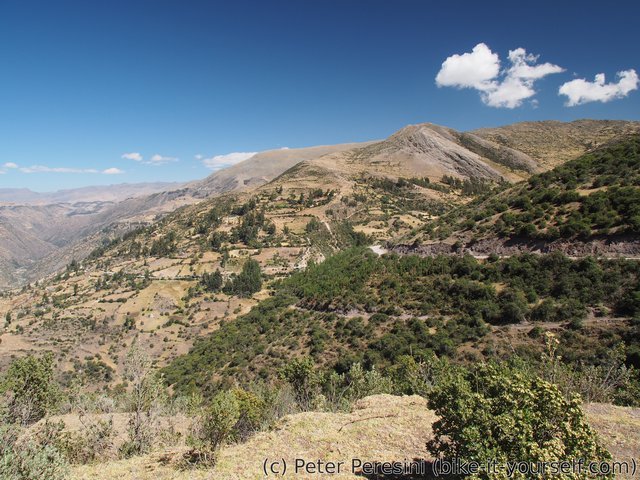 Scenery is getting greener 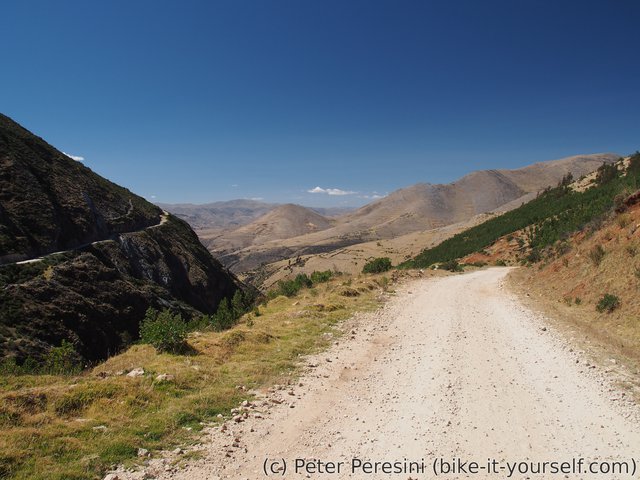 The road skirts some nice cliffs 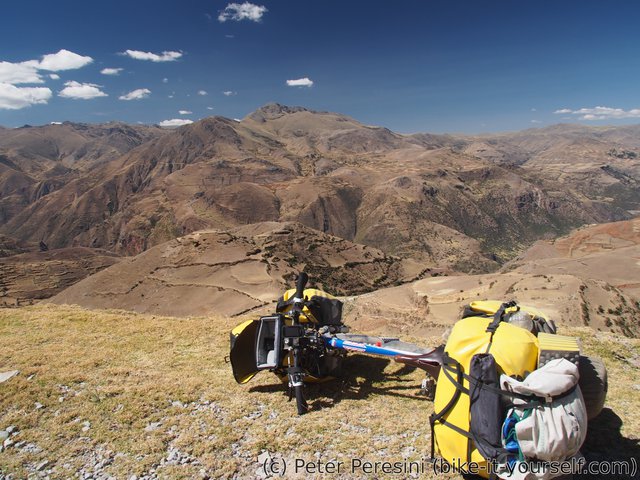 Not a bad place to have a quick cookie lunch 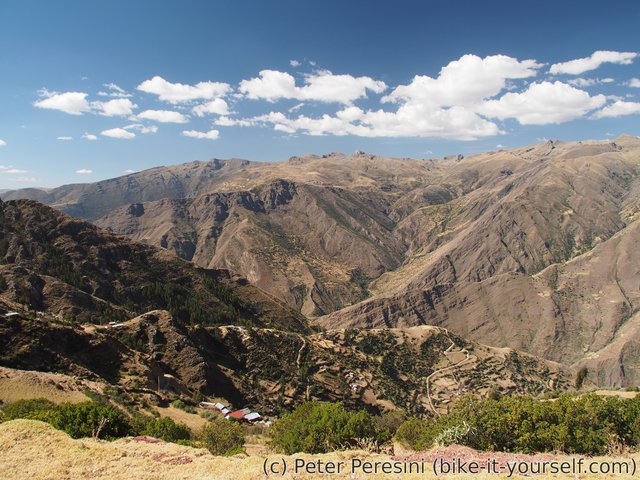 As the valley gets deeper the mountains around gets steeper 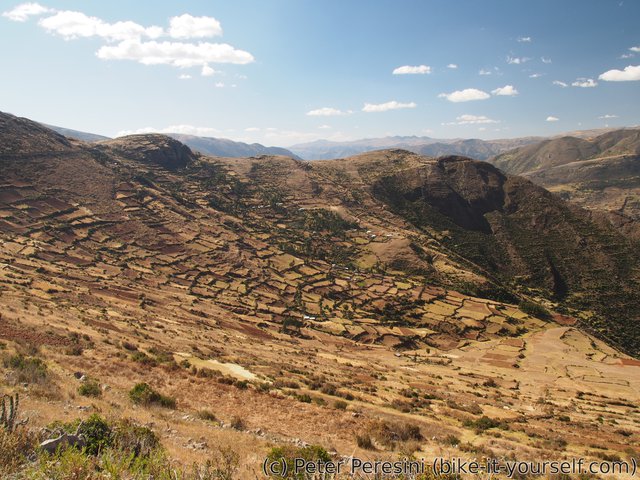 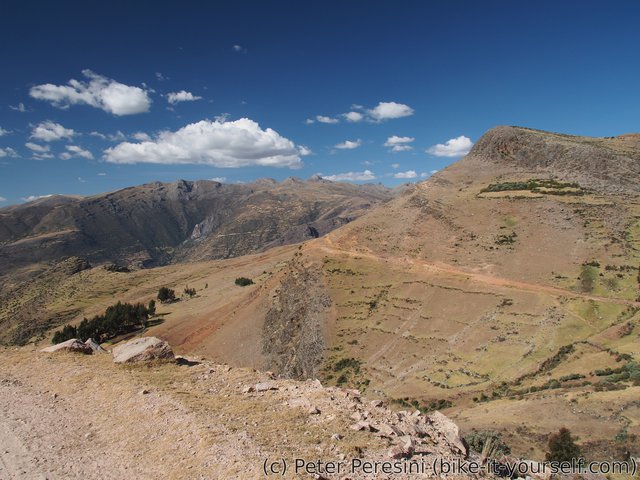 The views are certainly better than I imagined it while planning

Once I get to Mara I quickly find a restaurant to have a real (though late) lunch. Add a bit of shopping and I decide it is too soon to end just here. Instead I presume I can get some great mileage (and advantage for tomorrow's climb) by descending right now. In practice I quickly learn that this might not have been the brightest idea -- the road road is super busy with trucks and the road turns mudcrap after a few passing watering trucks. Moreover, I am delayed a bit more by road workers who are actively working on smoothening the surface. All in all, my descent is far slower than I imagined (but let's face it, I imagined that there might be a pavement on this major road). On the great side of news, I manage to find a great camping spot by taking the first track road I spot and going on it a few hundred meters below the road. This is my first time from before La Paz that I sleep under 3300m!

I start the day with finishing the descent down the valley. Then the climb starts and I feel myself hot, covered with the dust from passing trucks and bike covered in mud from the road. Basically, not something I would really like to remember. And while the mud stops a few kilometers before Capacmarca when the road gets suddenly paved the trucks and heat is still there. It is therefore a relief to get into Capacmarca and have some nice lunch. 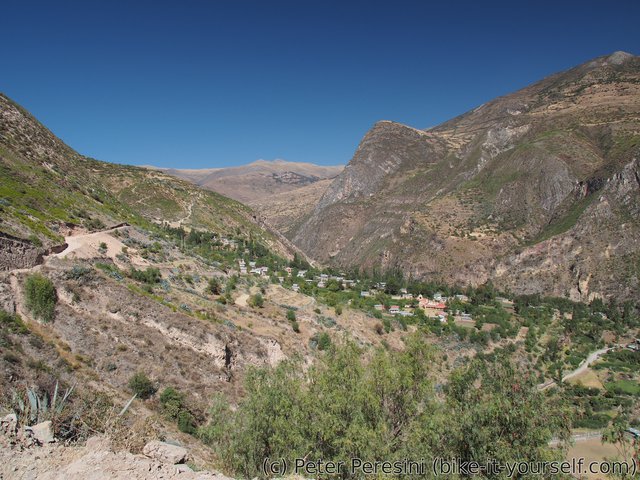 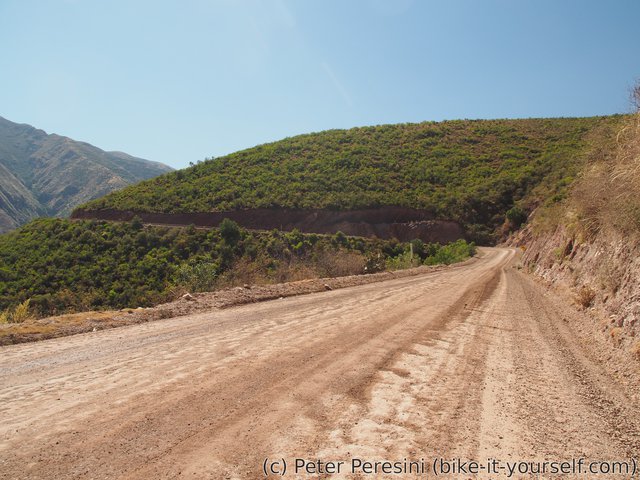 The road is compacted dust. Needless to say it is not a great idea to water it.

Knowing the amount of nasty traffic on the main road I decide to take an alternative. This climbs and descents to Tahuya village and it is a really beautiful and solitary ride. 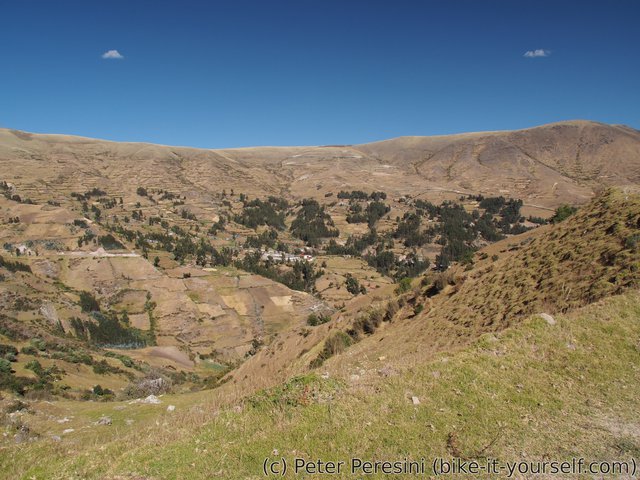 From Capacmarca I take a quiet and nice alternative 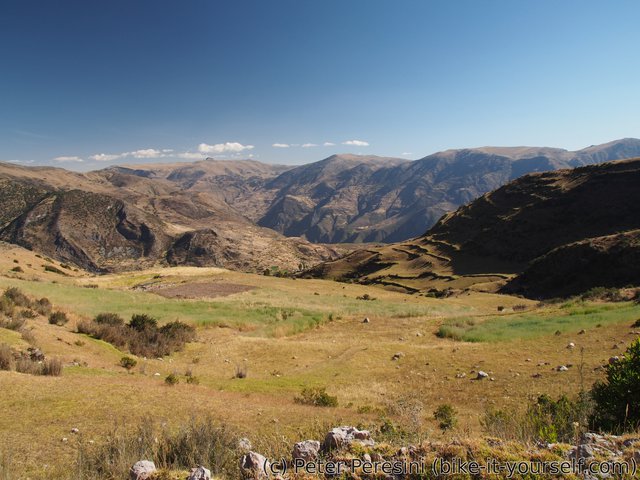 It certainly looks better than the dusty main road 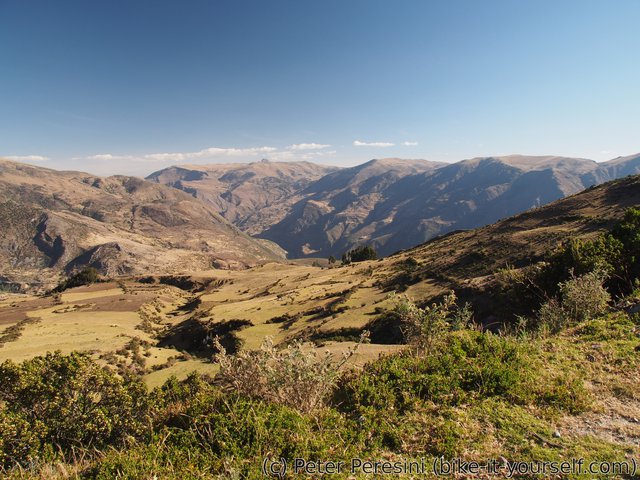 The deep valleys are fascinating

As Tahuya looks to be quite small from the distance I decide to stop and camp before it. And this is where all my nightmares start. As I am not camping stealthily at all I get a visitors in terms of two boys which are passing by. They are curious and want to know everything about my gear (which often includes price). Plus they warn me about "agentes malos" going on the road and try to invite me to their house but well, I won't really pack all my things now. So instead, they settle in my tent while playing with all the crap I have. As by now it is quite dark I decide to gently kick them out and wish goodnight.

When I try to log my day notes into the phone I realize that something is amiss. First of all, where is the damn phone? I am sure it should be somewhere in my tent. But the search yields nothing. The nightmare however quickly unfolds. In the progress of searching for my phone I realize that my camera is missing as well. And an ebook reader. A minute or more of searching and the truth downs on me - I was very well played and robbed! I try to run out of the tent and catch up with the boys but it is too late, there is nobody on the road. Defeated I return to the tent and settle on enumerating losses. It is about 1000 Eur worth of electronics. But also a week of very good photos, good photos for the rest of my whole trip (because my backup camera is nowhere as good as the main) and two months of notetaking (note that at this point in time I did not realize my notes were pretty much backed up to the cloud). With the feeling of misery I get to my sleeping bag and try to sleep. 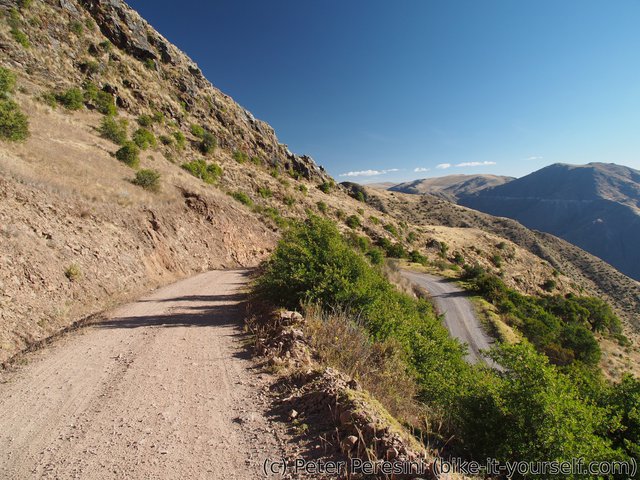 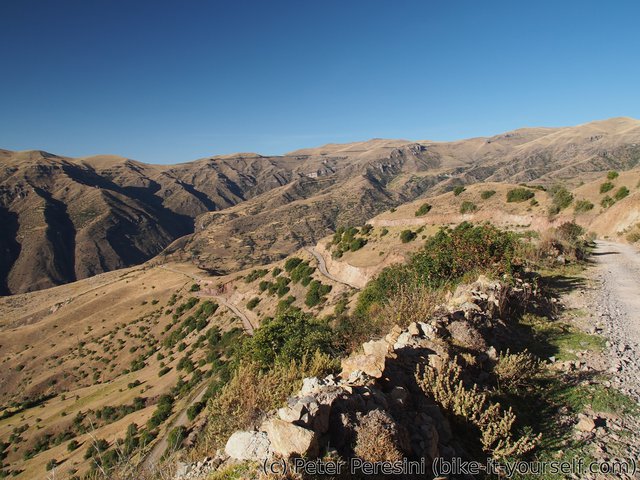 With the fresh head in the morning I go down to the village. There I am reporting what happened to me. Notably, I realized that one of the kids left his cap in my tent so I am trying to ask people if they can recognize the kids by the description and a cap. Unfortunately it does not seem to ring a bell. As the closest police commisariat is only god-knows-where the friendly villagers tell me just to wait with them while they try to figure out something. In the meantime they are working hard on splitting stones. I wonder what they are planning to build.

After about half an hour of waiting a good news suddenly appear. The kids are here with my electronics. It turns out they were just very curious and "borrowed" camera to shoot pictures. Of course, I never gave them my consent though now I remember that they were saying something about borrowing and me visiting their house and horses the next day (but then, my Spanish level isn't super good). E-book reader is there as well though they still don't get the purpose of electronic books. The only thing that is missing is my mobile phone. After a while even this is found -- the kids claim that they definitely did not take it but I am pretty sure it wasn't in my tent. The mystery is solved as their mum found it somewhere on the road. Personally I think they took it as well but it fell off. This is corraborated by the fact that the phone is split-open. The only missing part is SD card but I guess it just somehow ejected when the phone fell.

All in all, with an immerse relief I marvel at my great luck -- this could have been easily a real robbery. A note for readers -- I very well know that Peru is a thiefs country. And I am pretty careful when in potentially unsafe locations. But this happened in a middle of nowhere in Peruvian Andes which I deemed to be very safe. In fact, even locals were a bit surprised by my bad luck.

After the mystery of my robbers is solved I am actually going with them to what they promised me yesterday -- that they show me their horses. I even get a chance to "ride" one. Not that the damn beast wants to obey me. Instead, it just moves on its own to the next patch of grass ;-) 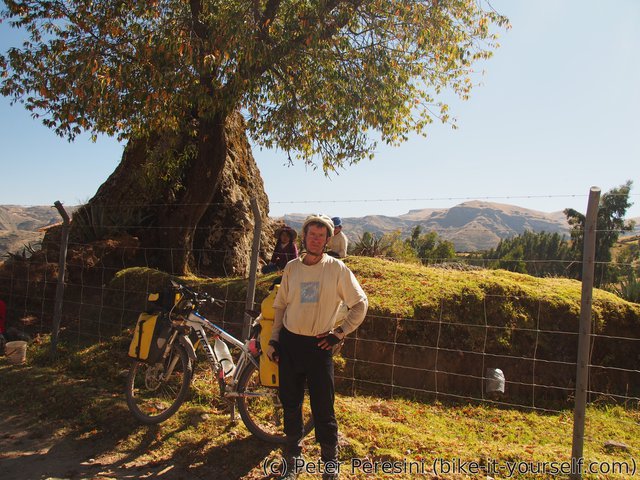 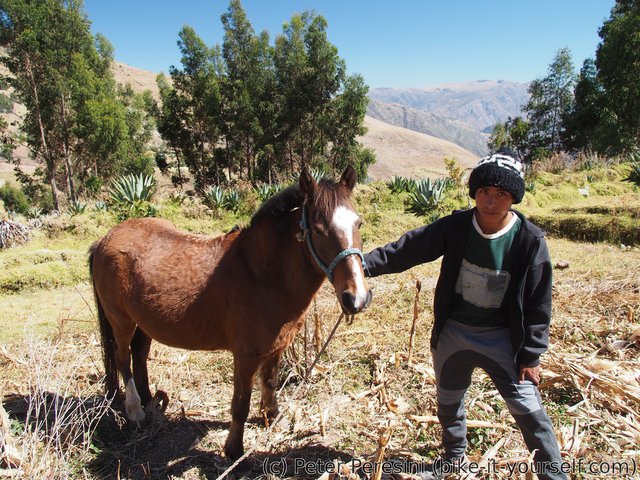 One of my "robbers" and his horse 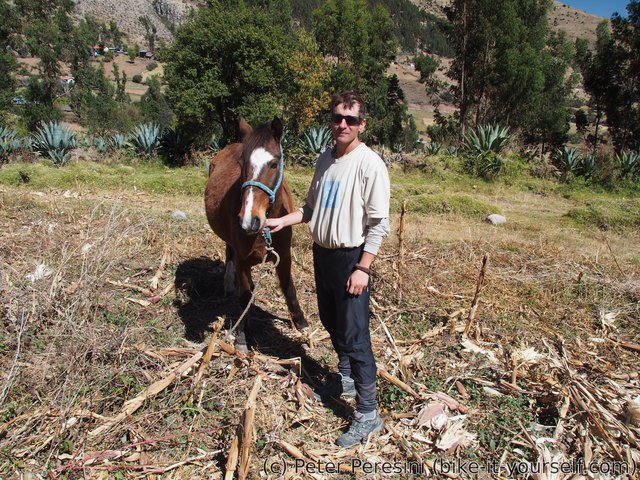 But hey, I can be friends with horses too 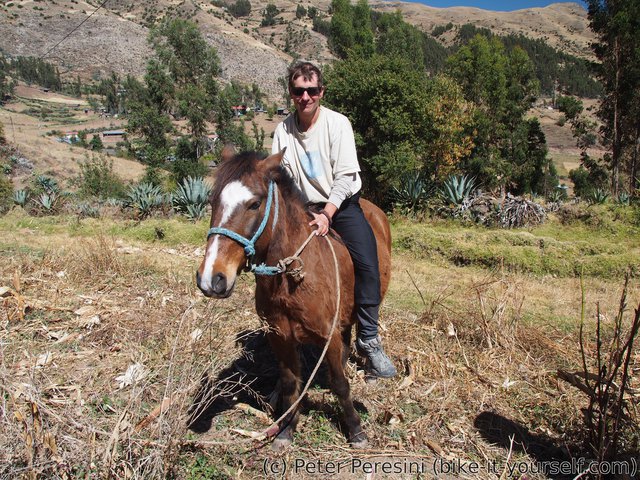 Look, I can even ride it (although the boys helped me to get up) 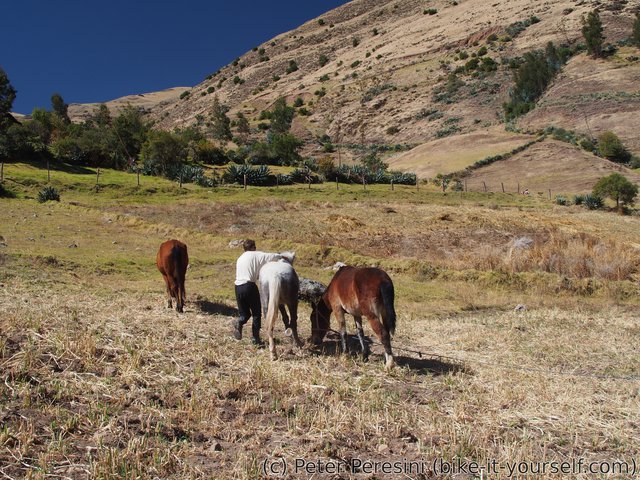 After my time with the horses is done I am ready to continue my journey. Of course, this involves a climb until I join the "main" road. Afterwards it is little ups and downs and the scenery becomes a bit more dull. I continue like this to the village of Ccoyabamba. As I expected the village is small. But surprisingly it basically features only tiendas, restaurants and a few hospedajes. I guess being on a "main" road means something. Though there wasn't bad traffic at all. I get a late lunch here and afterwards I just decide to stay. There is no point in continuing for 30-50 minutes more and trying to find a camping spot on a steep descent. Plus I am not really sure about water availability on the subsequent ascent so being full with water from the morning seems like a good idea. 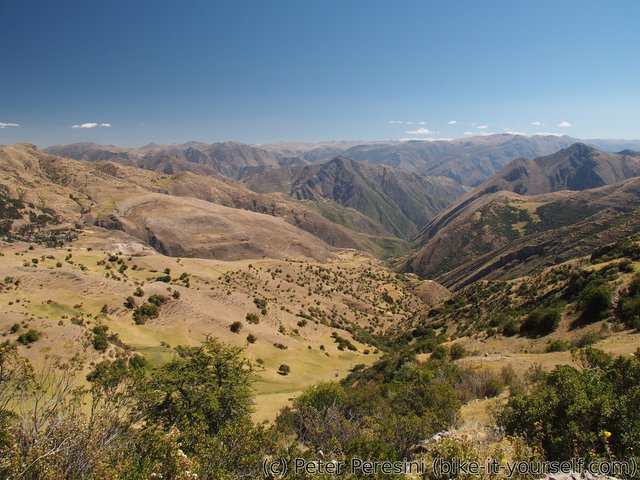 What is fascinating is how "flat" the tops of the mountains are. 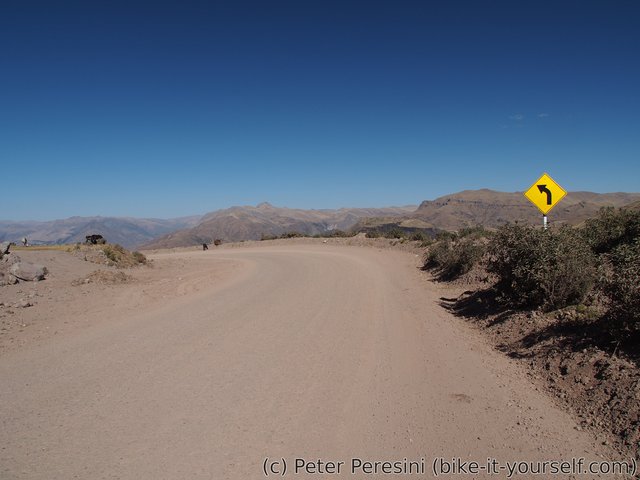 I join the main road which is quite wide 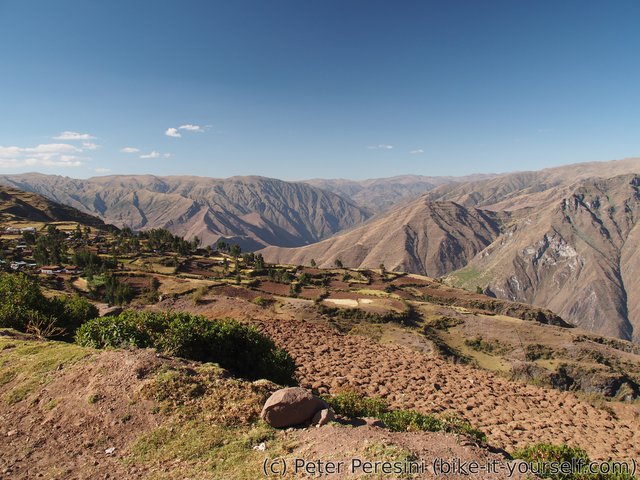 Before Ccoyabamba I am getting a preview of what tomorrow will look like. It is going to be deep down.

<a href=http://gcialisk.com>cialis pills for sale

Wonderful beat ! I would like to apprentice while you amend your website, how could i subscribe for a blog site? The account helped me a acceptable deal. I had been a little bit acquainted of this your broadcast provided bright clear idea