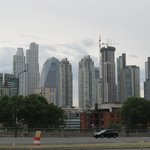 Buenos Aires -- a city which, according to my current (read: very limited) level of Spanish, should translate to "good airs" definitely does not have such a good air. As a city, Buenos Aires is very huge, very flat, and very expensive. Seriously, 50 USD to get from the airport to the hotel by a taxi? A bit much for my taste. At least they arranged me a taxi which could (barely) fit the bike box in -- I think this will be fun to arrange on my way from the hotel to the airport.

In any case, arriving to the centre of Buenos Aires is quite interesting. We were going on a huge motorway with 3-4 lanes in each direction and this monstrosity is actually built above the ground in the city. Obviously, Argentina is, similarly to the USA, heavily reliant on the automobiles for the transport. Which reminds me the drivers here -- it definitely isn't a honking Asian town but people (or at least taxi drivers) are driving a bit more pushy that would be normal. Oh, and did I mention tolls on the motorway? What surprised me was that my taxi driver was basically paying by cash -- apparently they don't have a concept of prepaid tolls for taxis here. One more thing that struck me during the ride -- unlike US cities, Buenos Aires is quite high even on outskirts -- three-to-five story buildings are pretty much everywhere and this slighylt reminds me Tokyo.

Anyway, after the ride I ended up in my hotel which on booking.com gladly says "we speak your language" but I guess "speak" equals "we can use google translate". But that is fine. At least I was able to have my first practice in the let-the-mobile-phone translate this for me with a realization that half of the sentence I should have known already.

Because it was quite early, I decided to visit the city. Of course, not on the official tours but basically strolling around myself and in the meantime finish some todos such as withdrawing money and getting a local SIM card. And both these actions proved to be a miserable failure.

Let's start with withdrawing money. ATMs are pretty much everywhere but the maximum amount of menoy they allow you to withdraw is 2000 Argentinian pesos which is less than 150 Euros. You would say, OK, I withdraw multiple times. But these bastards (on top of my bank which will have a feast on conversion rate) also ask for commision of 100 pesos (e.g., 5%). Seriously, screw Argentinian banks.

Next was a SIM card. I was able to get one pretty quickly for Claro but unfortunately it isn't working correctly -- apparently I am unable to send (international) SMS to Slovakia (but I was able to send one to my Swiss number. I wonder what is the deal). And, tamdadadam, surprise surprise, even if the SMS does not go through, you are chraged for it (oh, and did I mention that SMS costs 1.20 pesos according to the tariff? No? Well, it apparently cost me 3 pesos, maybe because it is international or some other bullshit). And of course, I figured out that trying and failing to resend the SMS costs me money only after I run out of my credit. Oh, and you cannot recharge it with a credit card (you can recharge it with a bank account but as you may guess Slovak banks aren't on the list). So to sum it, this was a miserable failure and I am planning to resolve the situation in Ushuaia by getting a sim card from some other operator.

My touristic visit was a bit more successfull. I come across a preparation for som LGBT concert or something. I walked around a bit more wondering what it is happening that all the shops are closed today. Seriously, out of all shops/businesses in Buenos Aires, at least third of them was closed and another third of them was under reconstruction. 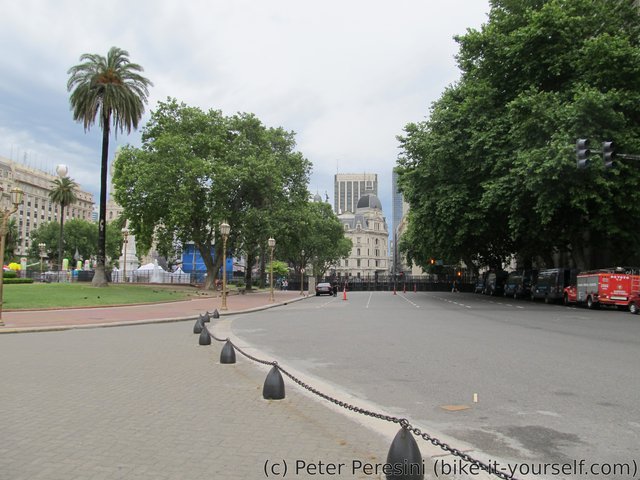 Empty streets look quite post-apocalyptic. Fortunately, this is only a local closure.

To finish my day, I do not know what I did to Gods of Argentina but it must have been something awful -- apart from expensive city with stupid ATMs and non-working SIM, I won another treat. And the treat it was -- suddenly the skyies get dark and there was this thunderstorm with nice (and close) lightnings. The unfortunate part is that the rain basically stayed the whole afternoon so after waiting the worst in some dry places, I just went back to the hotel room to write this blog post and rest. Hopefully I will be able to see more some next time