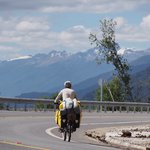 This is my last section on Carretera Austral. Originally, I wanted to make a detour through Lago Verde and later on I was even thinking of going to Pumalin National Park instead of Futaleufú but my plans are cut short by my chain -- now that I don't have a chain tool it is imperative to get one as soon as possible and go on roads which are travelled by at least some cyclists.

I am spending this day at Puyuhuapi in a camping which is quite cool as it has a roof for tents. I guess it might be raining here quite a lot ... Today's weather with random heavy showers isn't for cycling anyway so instead I am getting a rest, blogging (though there is no electricity nor Internet between 11am and 4pm) and badly-needed washing service.

I am leaving Puyuhuapi around 11am on a ripio road and my plan is to go at least to La Junta and then a bit more if possible. So it is no wonder that just after a few kilometers I have a lunch near local park ranger office which seems to be closed. After a lunch I am taking a quick and short hike to a viewpoint of lago Risopatrón. The trail leads through a wet forest around a lake and is quite short. 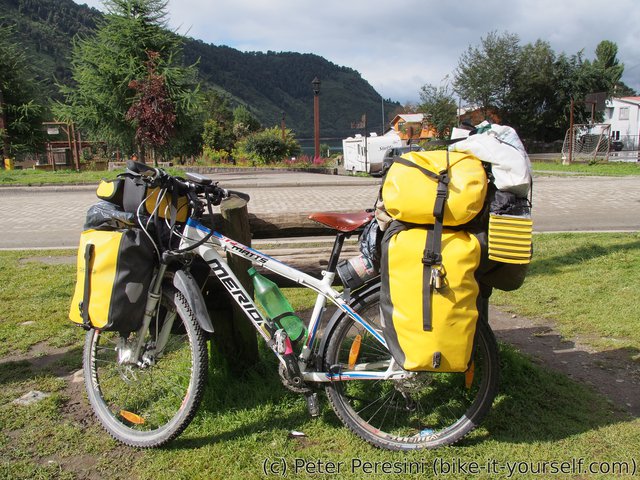 Ready to leave after a pit stop at a local shop 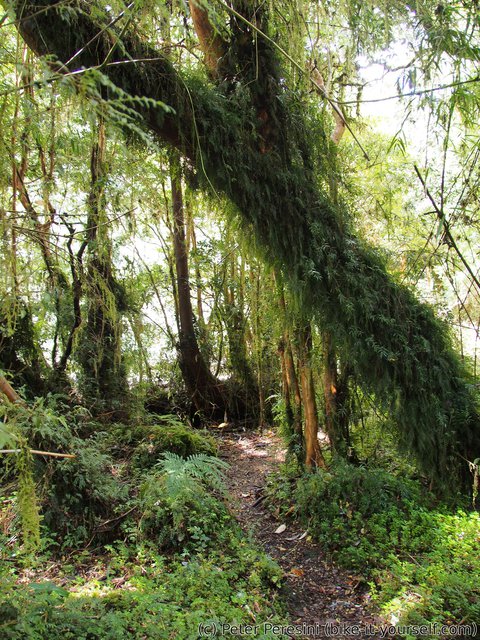 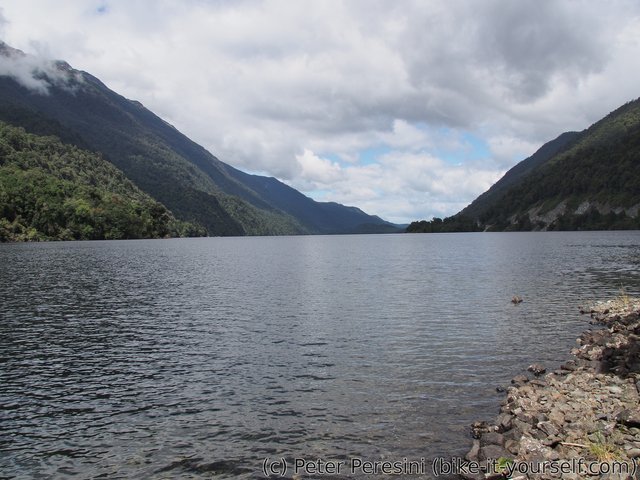 After lago Risopatrón the asphalt is back which makes a good ride because there is a long and slow descent, almost a flat road. My friend Thomas overtakes me here but we hope to see each other in La Junta. In La Junta I cannot find Thomas. Instead, I am finding a bakery and I am getting a nice afternoon snack and them I am off again. 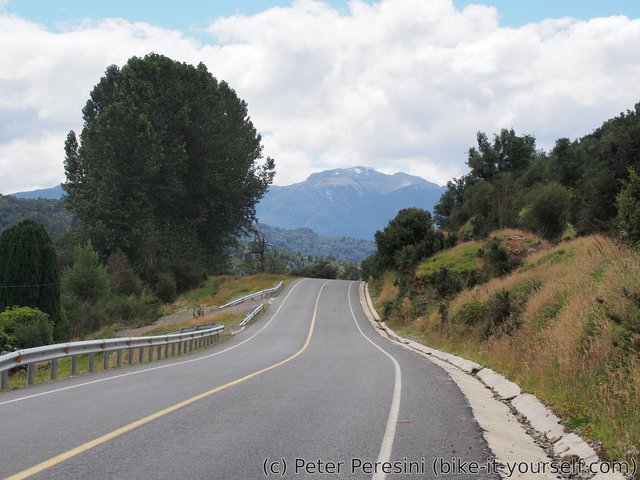 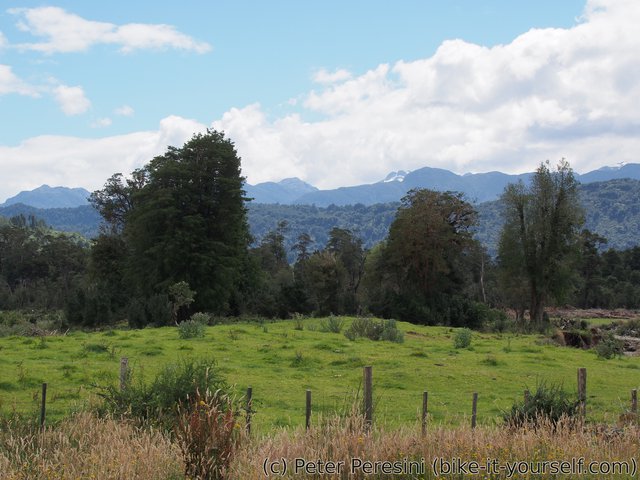 I am going through the land of pastures 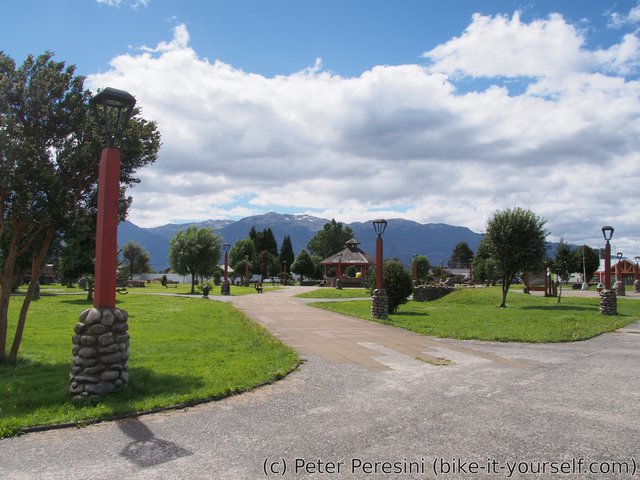 Late afternoon is a time of meeting interesting cyclists. First I am meeting another Peter. This one is from Germany and cycled here from Peru. But that pales in comparison with my next catch --- Pablo Garcia traveling on bike for 15 years now! Wow! You can check his site theworldbybike.com

In any case, the road is now more uphill and after some kilometers the asphalt ends and is exchanged by not-so-stellar ripio. Fortunately the views are nice and when I am trying hard to find some good place to camp along the endless cow pastures, I am finding a bus stop instead. This one is decent enough so that I decide to sleep there without setting up a tent. 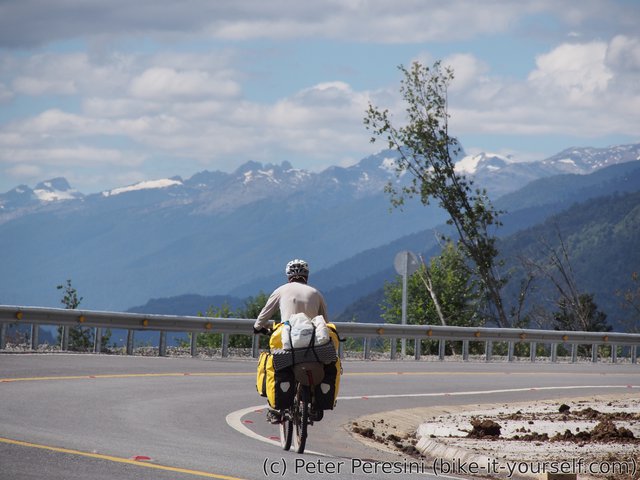 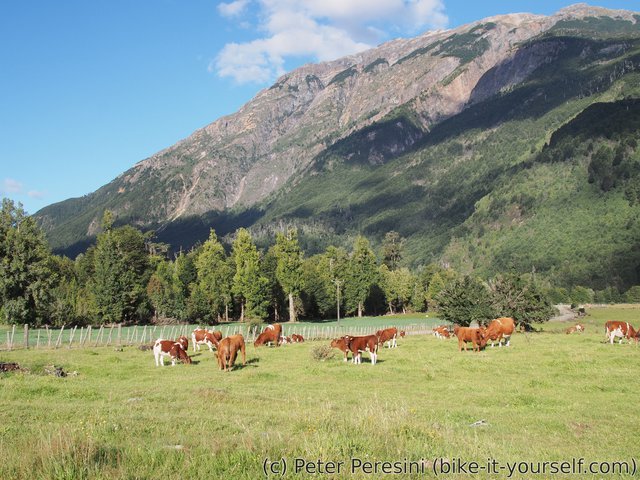 If it wasn't for the ripio road, I would think I was magically transferred back to Switzerland 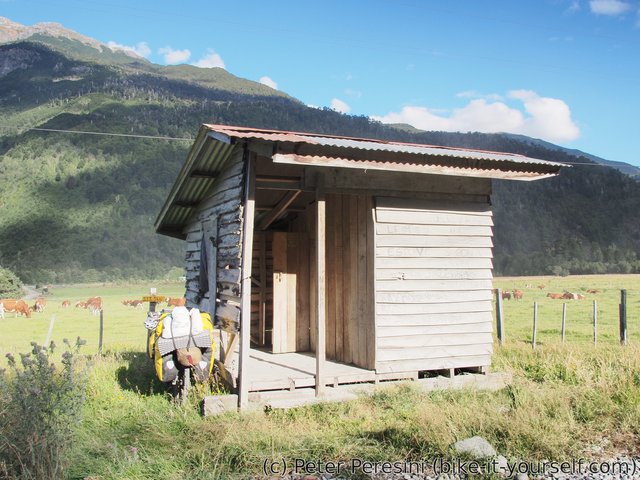 As I am having my dinner, I am meeting another cyclist --- this time a guy from New Zealand. He definitely likes this place because returns to Patagonia each year and cycles a slightly different part of it. But he decides to push on and so I am left alone for the night.

The morning weather is something new to me. There is a pretty heavy mist. Which of course dissolves into a good weather as the day progresses. I am continuing on a quite bad ripio until I reach a micro village Villa Vanguardia. There is basically nothing there, except some good views and a start of the pavement. 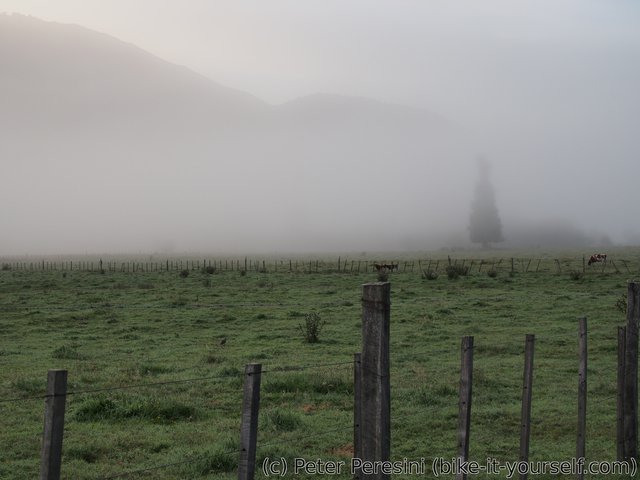 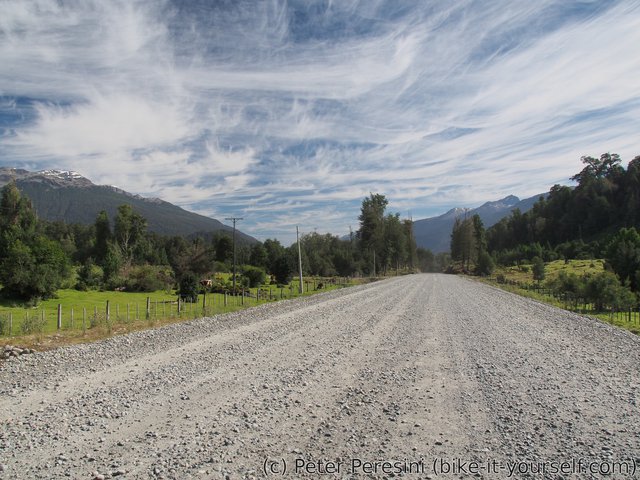 The weather clears quickly though 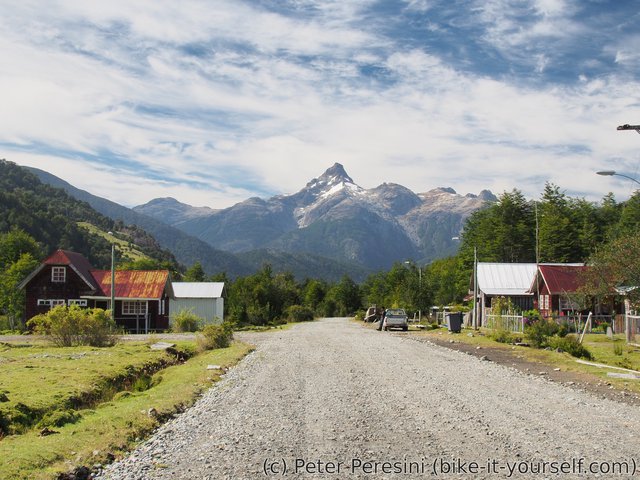 The country is still farmland and as I result I have a lunch near some cows. To my surprise, my German friends Marta and Moritz pass along. This was unexpected because they left Puyuhuapi the day before me. But the bad weather and Moritz's recovery from the illness did not help with their mileage.

I am also learning that it is very important to look back at what I have done. Literally. The views behind me are just stunning. I am also meeting a nice cyclist from Australia and while we chat, Thomas also shows up. However, after we start cycling again, he quickly overtakes me and disappears. 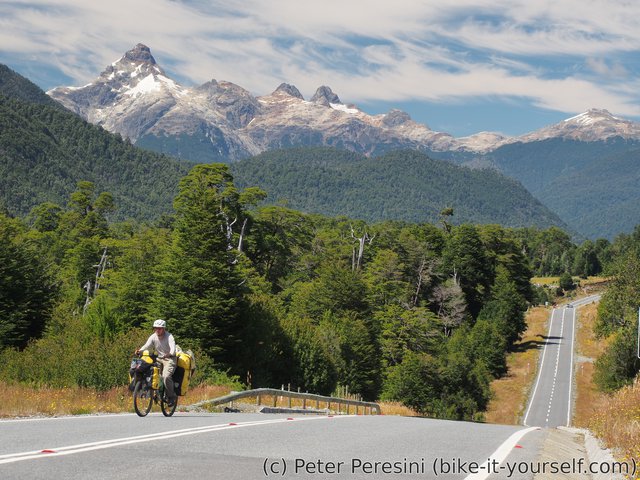 It is imporatant to sometimes look back. You may end up seeing a stunning scenery 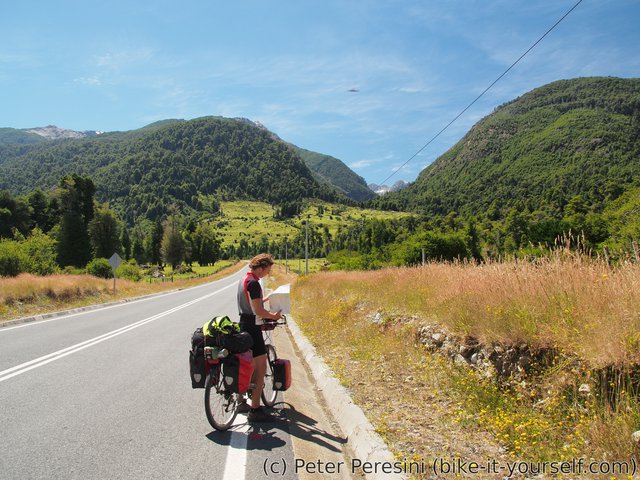 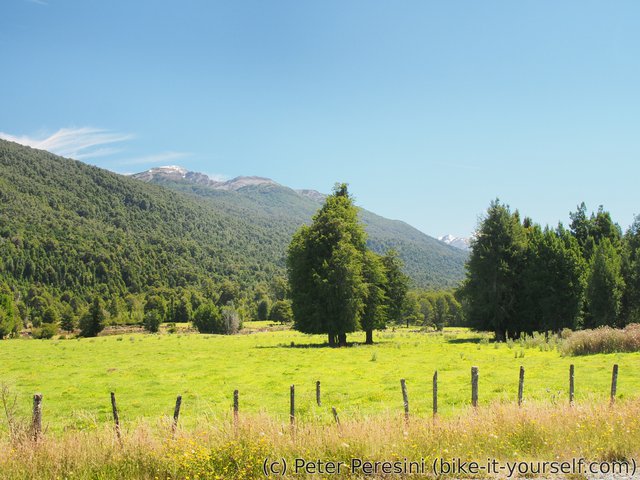 The land of green grass

As I am nearing Villa Santa Lucia, there is suddenly a change in the views -- the mountains have some nice glaciers. But not for long. In the village I need to take decision whether to cycle towards Futaleufú or Chaitén. I am torn because both roads promise great views. In the end I am swinging towards the first option-- Pablo (the guy cycling for 15 years) and the Australian both claim that national park Los Alerces on the Argentinian side is extremely nice. Plus there is a possibility of some rafting in Futaleufú. And from other cyclists I am learning that Chaitén was "destroyed" by a volcano  a few years ago and while it is getting back to the business, finding a bike shop there is very questionable. 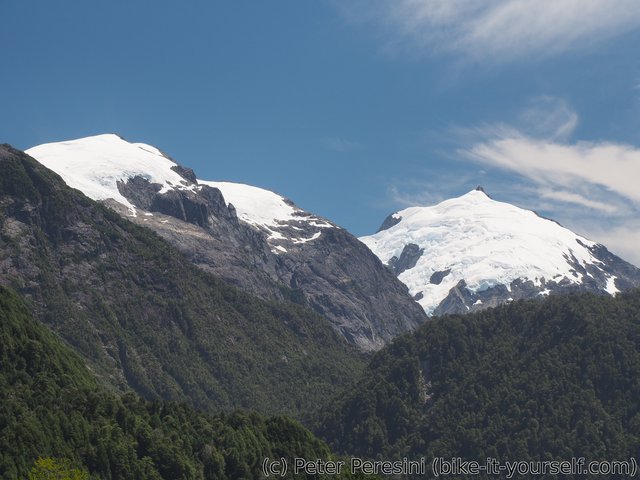 So let it be Futaleufú. Which means I am leaving Carretera Austral for good and with it also a pavement and instead replacing it with a pretty bad ripio. It is also surprisingly hot right now but at least there is a bit of a breeze to cool down. The road goes around a big lake Lago Yelcho which suddenly opens a dream-like scenery. As it is quite late now, I am trying to find some good camping spot. Which I hoped to get around the lake but I didn't see anything particularly nice (there was one public beach but there were too many people there at the time). So I continue further and in the end I find a decent flat place near a road. And surprisingly I also have visitors -- some fisherman show up in a car, park it near and then cross the fence to access the river. Maybe I should have done the same and stayed on a nicer grass. But then, I don't think I would like cows visiting me in the morning. 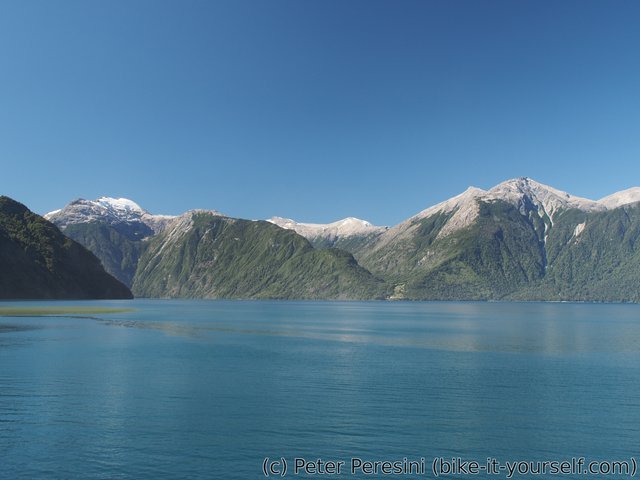 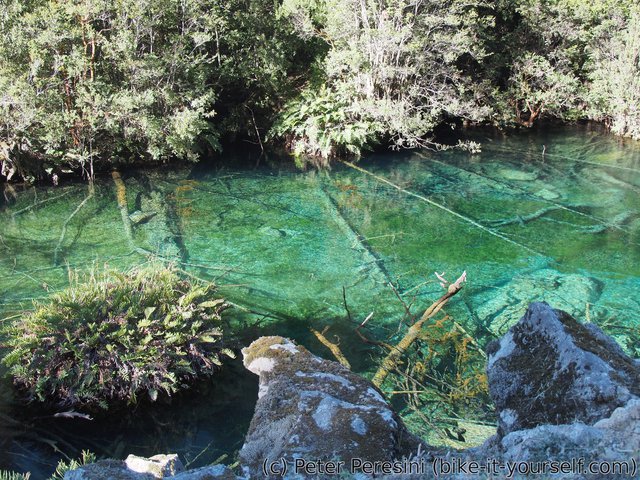 Amazingly clear water of some pond

The morning is quite windy and thus chilly. There are even high clouds that steal the heat from the Sun. The whole day is basically around river Futaleufú. The views are different from yesterday but still good. During the lunch break I am meeting Thomas again. He has a problem with his front Ortlieb pannier. Which is quite fortunate for me because I am learning that some (special) screws on the pannier tend to loosen over time and it is a good idea to check them regularly. 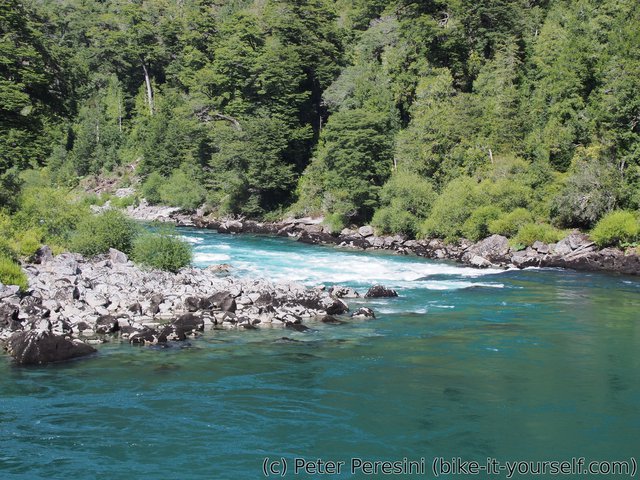 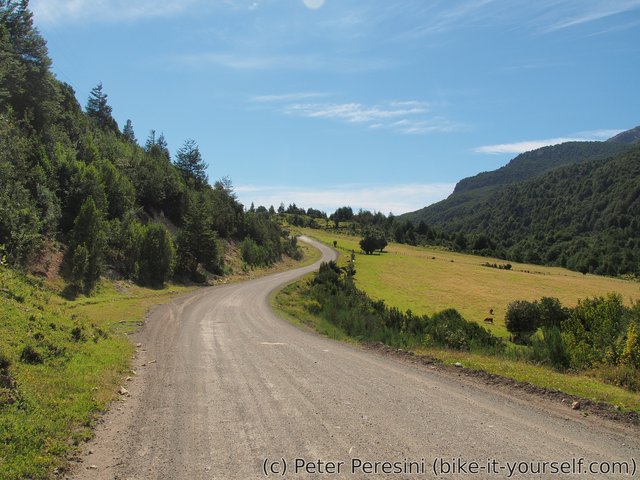 Heat and uphill. Not a good combination 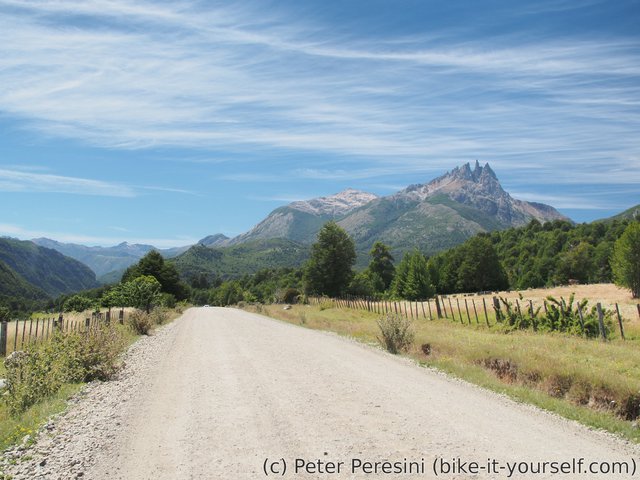 If I am not mistaken, the mountain on the right is called Las Monjas -- the nuns.

On some wood-engraved information map I am learning that there should be a waterfall at Lago Espolón so I am making a detour there. Unfortunately, I don't know how to access the waterfall as there are no apparent signs which road to take. I am even trying it a second time after the detour but still without a progress. So in the end I am arriving to Futaleufú without seeing it. But it must be big because there is a big river and a big elevation difference which sounds exactly like a good recipe for waterfalls. 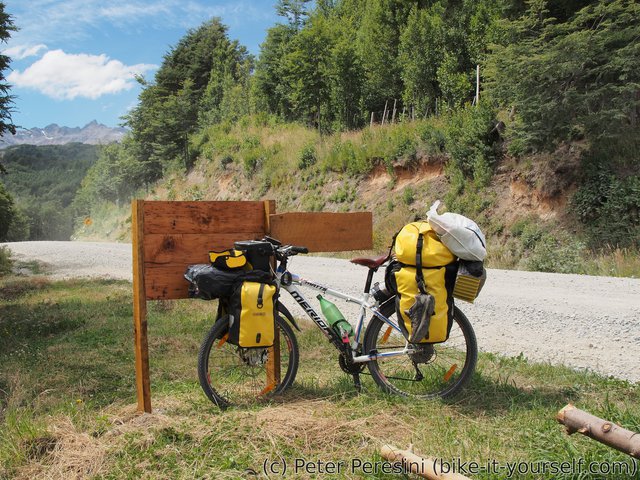 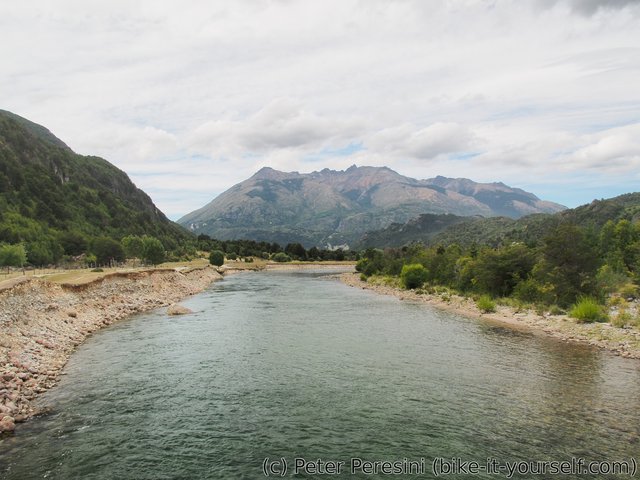 The unseen waterfall should be on this river. I guess it would have been spectacular if I knew how to access it.

This is really interesting, You're a very skilled blogger. I have joined your feed and look forward to seeking more of your great post. Also, I have shared your website in my social networks!

Hello there! I know this is kinda off topic but I'd figured I'd ask. Would you be interested in exchanging links or maybe guest authoring a blog post or vice-versa? My website goes over a lot of the same topics as yours and I think we could greatly benefit from each other. If you are interested feel free to shoot me an e-mail. I look forward to hearing from you! Wonderful blog by the way!